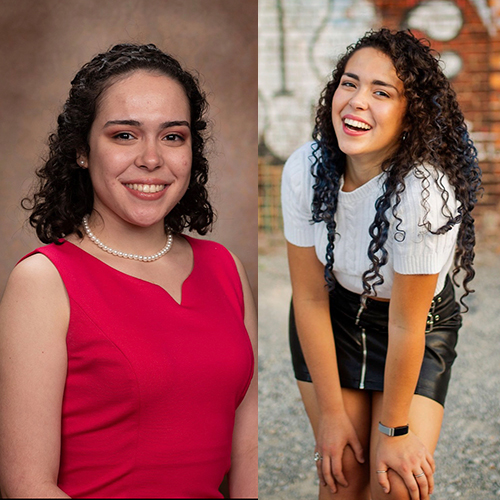 The Mahurin Honors College (MHC) is home to scholars from all backgrounds and heritages, each bringing with them their own intricate and remarkable stories. In celebration of the recent Hispanic Heritage month, the MHC is honoring some of our amazing Hispanic scholars. Allow us to introduce the Howard twins, Autumn and Heaven.

Having grown up in Gallatin, TN, the pair came to the hill in 2020 following high school graduation. Autumn is a double major in English and Spanish, and Heaven is studying Management with a concentration in international business.

Both Autumn and Heaven explain their Hispanic heritage played a significant role in forming who they are today.

“I used to want to have my hair straight,” said Heaven. “I didn't like my curly hair. In elementary school, boys would point out how my eyebrows were dark, and I became super insecure. However, as I grew up, my mom taught me to embrace curly hair.”

Heaven said that her twin sister Autumn remained her constant support system as she learned to embrace her heritage.

For Autumn, “being a part of the Hispanic culture has almost defined me. Being mixed (half Caucasian and half Hispanic) and growing up in Tennessee, I wanted nothing more than to know and understand my Hispanic culture on a deeper level. Therefore, I started learning Spanish, traditional Latin dances, and cultural dishes from a very young age. I remember asking my mother all sorts of questions and having her instill that part of my identity. I say this because I would not be where I am today if it wasn’t for this passion.”

The Mahurin Honors College has played a significant role in each of the Howard sisters’ lives. Heaven cherishes how the MHC has invested in her and her heritage through several scholarships.

“The MHC has allowed me to be open to more opportunities. I have so many opportunities because of my heritage. I can apply for these scholarships which allows me to add to my resume and get further.”

Heaven also praised the Office of Scholar Development (OSD) for their partnership in helping her apply for nationally competitive opportunities such as the Fulbright and Fund for Education Abroad.

While also in the Professional Writing Club, English Club, Christian Student Fellowship, the National Society of Leadership and Success, and Sigma Tau Delta, Autumn currently serves the MHC as an H4 counselor. She says the MHC has given her unique insight into diverse perspectives.

“I believe the mix of cultures I’ve experienced has given me both a unique perspective on the world and an adaptability that is helpful in the Mahurin Honors College. It has also allowed me to connect with all sorts of different people whether they be Hispanic, Caucasian, or also have a multi-cultural background. This has been especially prevalent during events like H4 where it is paramount for counselors to connect with incoming scholars with different experiences.”

Autumn is currently on a year-long study abroad program in Spain. While taking classes abroad, Autumn is also completing her Capstone Experience/Thesis (CE/T)  which will encourage the reading of works in translation. She said her heritage played a unique role in connecting with others around the world.

“What’s interesting about studying abroad in a European country as a Latin American/American student is that I can almost fit in with any crowd. I can look European, American, and Latina, and all of those have different implications here. One of my favorite things is finding other Latin people and connecting with them based on the mere fact of place of origin. It’s almost as if there’s an unspoken sentiment of solidarity amongst us, which I have been so thankful for.”

Heaven has planned a semester study abroad in Harlaxton and eagerly awaits the moment she can reunite with her “best friend and favorite person.”

Both Howard sisters have taken advantage of the many MHC resources and credit them with much of their collegiate success.

Autumn shared, “My time at the Mahurin Honors College has been so incredibly life-changing. This is mostly due to the dedicated staff. Everything that I have done or wanted to do academically has been because of the help and support of the MHC team. For example, I would not have even had the idea to study abroad in Spain for a year had it not been for Dr. Craig T. Cobane. I also would not be doing a CE/T if it weren’t for him; he has been an integral person for me. I have also been encouraged and helped by the members of OSD in nationally competitive scholarships. Lindsey Houchin has sat with me on many occasions as I prepared for study abroad. Dr. Melinda Grimsley strengthened my understanding of myself and my passions during the Fulbright application process. Outside of OSD, Susann Davis has helped me tremendously with my CE/T; I would not be doing what I am without her. Finally, Zack Ryle and Laura King have given me several opportunities with the MHC —specifically at H4. They gave me space to lead and grow with their unending support. Therefore, to answer that seemingly simple question, I would describe my time at the Mahurin Honors College as transformative.”

We are so proud of Autumn and Heaven and can’t wait to watch them both take on the world. We love you both!