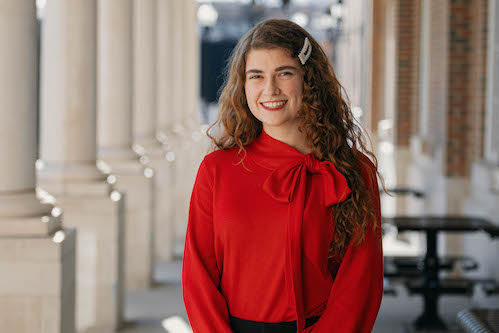 Zena Pare has certainly made the most of a WKU experience that helped her dreams come true.

“I had dreams of studying abroad and seeing the world. I had dreams of moving to New York City. And dreams of having internships, making all these great friends and having memories. So I think a lot, if not all, of my dreams came true.”

Pare, a senior from Alvaton, will be recognized Saturday as the Ogden Foundation Scholar. WKU’s top undergraduate academic award is presented to one graduating baccalaureate degree senior who demonstrated exceptional academic achievement and outstanding university and civic engagement. (More: Zena Pare is featured in this week's View from the Hill.)

“Upon reflection,” she noted in her award essay, “I am overwhelmed by the depth and width of my experiences at WKU. An eternal optimist, I am committed to envisioning the world's potential and acting to better it; therefore, I pursue opportunities to educate myself to help others. I feel I have explored as many opportunities as possible that WKU has to offer, and in turn, WKU has thrown open its doors to the world, widening my perspectives.”

The daughter of Dr. Grady H. and Cindi Pare, she’s a triple major in Economics, Corporate and Organizational Communication, and International Business with a minor in American Sign Language Studies and certificates in Applied Data Analytics and Advanced Professionalism.

She’s a member of the Mahurin Honors College at WKU and completed an Honors Thesis titled “Banking on Her: The Effects of Microfinance on Women’s Autonomy in Developing Economies.” She also participated in Semester at Sea and studied abroad in Costa Rica.

She held leadership roles in several campus groups, including Women in Business, HonorsToppers, Honors Development Board, Tennessee Valley Authority Investment Challenge Program and Omega Phi Alpha National Service Sorority, in addition to others. She was a guest on the Women in Economics podcast from the Federal Reserve Bank of St. Louis.

She was a WKU Admissions Ambassador, a research fellow for the BB&T Center for the Study of Capitalism at WKU, a lab staff member at WKU’s American Sign Language Lab, and an intern with J.P. Morgan Chase & Co. in New York City, Federal Reserve Bank of St. Louis, International Center of Kentucky in Bowling Green and Kentucky Governor’s Scholars Program in Morehead.

Pare credits homeschooling with giving her the academic drive and initiative to create and pursue opportunities for herself and others.

“Homeschooling really gave me the space to have my own academic interests and take a lot of initiative with my learning and involvement,” she said. “I was actually able to, thanks to my homeschool, complete my American Sign Language Studies minor before I even graduated high school. WKU was great from the start in working with me on that and letting me take those classes while I was still in high school.”

Like other students in the Class of 2021, Pare completed her WKU journey during a global pandemic. A plan to study abroad at an international business school in France was delayed and then canceled. Pare used the opportunity to apply for more internships and worked as a summer analyst at J.P. Morgan in New York City.

“One piece shifted and another one fell into place,” she said. “I adjusted as best I could and tried to make the most of the opportunities that had changed or closed.”

The internship at J.P. Morgan resulted in a full-time job in Power and Renewables Investment Banking with the company that will begin next summer.

“Being in New York was an absolute dream. I have wanted to move to New York for a very long time, and I’ve been working toward these broader themes and goals that I have. It was really a dream come true.”

Before heading back to New York, Pare hopes to rest, do some traveling and maybe take the GRE in the spring.

“I have a lot of ideas of things I would love to do at some point. Write a book. Give a TED talk. Those are on my list of things I’d love to do, but I think to do that you need to have a lot of life experience, a lot of career insights, or some other kind of experiences that give you the knowledge to talk about. I think I’m just excited to see how my career unfolds and where it goes.”