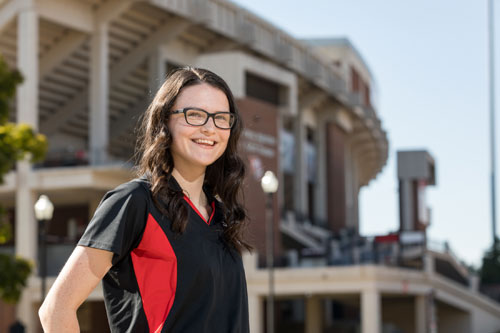 Rachel Begley is a senior pursuing a Bachelor's degree in Exercise Science within the College of Health and Human Services (CHHS) at WKU.

Looking back on her time as a senior in high school, Begley was nervous about her transition to college with a limited support system on campus. She made the decision to come to WKU after her brother graduated in 2017.

“I was able to see a lot of campus before making my decision and chose WKU because it instantly felt like home to me. It provided a sense of belonging because of the welcoming nature of the WKU community.”

Begley was proactive and joined as many clubs and student organizations that time would allow her in order to build a network of friends. “I got involved in the St. Thomas Aquinas Catholic Newman Center for a deeper connection to my faith and to meet people who were doing the same. In addition, I joined the Exercise Science Club, became a CHHS student ambassador, and a member of the health pre-professional honor society known as Alpha Epsilon Delta (AED).”

CHHS pushes each student to make a difference in their lives and the lives of others, through actions that will make a positive impact in their programs, community, and beyond. Begley takes part in various opportunities in exercise science like volunteering and doing her practicum. “I like to ensure that I am giving my best to be a good representative of the major and all it has to offer. In addition, I hope that by working hard and succeeding in my classes I will be able to use the knowledge I have learned and make a difference in people's lives.”

Prior to acceptance into the Exercise Science program, students are required to take part in a practicum experience that involves observation hours in a work environment specific to their field of interest. Begley started shadowing in an outpatient physical therapy clinic in 2019 in her hometown of Springfield, successfully completing 150 hours.

“This experience gave me an insight into the world of physical therapy and both the triumphs and challenges that can be faced,” Begley said. “By watching the care and relationships formed between the patients and the physical therapy team, I confirmed that physical therapy is the path that I want to take. I want to be able to make a real difference in the lives of people to ensure they get back to doing the things that they love.”

Begley is most proud of her recent applied learning opportunity as it’s helped her to discover the population she enjoys serving most. “This past August, I took part in research with my academic advisor, Dr. Jason Crandall, for an NIH approved study focusing on the physical and cognitive impact that Bingocize – a health promotion program that strategically combines the game of bingo with exercise and health education– has on older adults.”

In November, after 12 weeks of service, Begley will return to these communities for post-testing to determine the impact this program had on the participants. “This research experience has provided me hands-on learning that will pair with the concepts I’m learning in class.”

Next semester, Begley will finish out her undergraduate degree program by completing a 300-hour internship with plans to work in a nursing home or hospital. After graduation, she has her eyes set on a Physical Therapy Assistant program in Somerset to specialize in the geriatric population. In addition to obtaining ACSM certification to be an Exercise Physiologist.

Looking back over her time thus far on the WKU campus, the best part of her experience has been the relationships built on the Hill, “I will always be grateful for the support I have received and will carry these connections with me into the next stage of my life,” Begley said.

For more information on the Exercise Science program at WKU, visithttps://www.wku.edu/exs/.