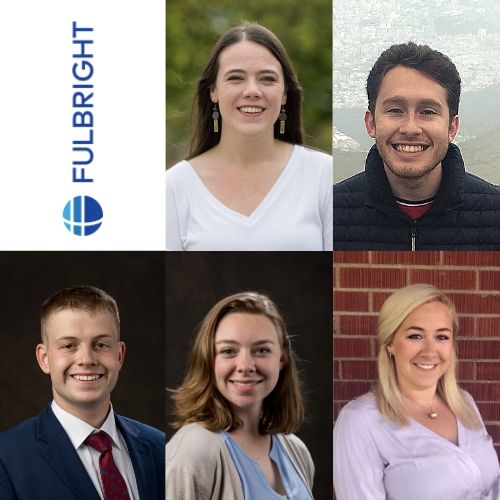 Two WKU students have been named Finalists for Fulbright US Student Grants for the 2020-21 academic year by the US Department of State and the J. William Fulbright Foreign Scholarship Board. An additional three have been designated alternates. They are among over 2100 graduating seniors and recent graduates nationwide selected this year on the basis of academic and professional achievement as well as record of service and leadership potential in their respective fields.

The Fulbright US Student Program funds 10-12 months of research, study, or English teaching worldwide. The COVID-19 pandemic has significantly altered the operations of the program; grantees who were abroad this spring were brought home to the United States. Those awarded this spring have seen their start dates postponed and programs in many countries reduced or canceled altogether. In response, the Fulbright Foreign Scholarship Board has changed program policy this year; 2019-20 grantees whose programs were cut short, as well as 2020-21 finalists (those who have been offered awards) and alternates are eligible to reapply this fall for the 2021-22 grant year.

Madeline Allen, a 2020 graduate in Middle Grades Education in Social Studies and Language Arts, is the daughter of Marya and Robert Allen of Bowling Green. A TESOL minor, Madeline has worked with English language learners at WKU, the International Center of Kentucky Literacy Center, a local elementary school, as well as at a refugee center in South Africa. In 2018, she spent two months in Malaysia teaching English, serving in her host community, and learning about the diversity of cultures there, which led her to apply for a full year as a Fulbright English Teaching Assistant.

Madeline was inspired to seek the experience of encouraging mutual understanding at the heart of the Fulbright Program through cross-cultural experiences that began at WKU. Forming friendships with international students on campus “was like taking small bites of a hundred different dishes. In contrast, my experiences immersing myself in the cultures of other countries have been like sitting down at a five-course meal, taking in an overwhelming yet exhilarating amount of information, tastes, and experiences.” She credits TESOL faculty for teaching, inspiring, and mentoring her through college and looks forward to connecting Bowling Green students with Malaysian students to spark their interest in cross-cultural understanding.

Antonio Clements, a 2020 graduate in Psychology, Spanish, and Sociology is the son of Maria and Barry Clements of Louisville. Like Madeline, Antonio made the most of international education on and off WKU’s campus. In addition to tutoring international students at WKU, he has been active in HOLAS (Hilltopper Organization of Latin American Students) and Beta Gamma Phi, WKU’s multicultural fraternity. Antonio studied, interned, and conducted research in Ecuador, India, China, Mexico, and Ireland, building a personal and professional network that spanned several continents. He looks forward to sharing Salvadoran-Louisvillian-American culture with his host community.

Brian Anderson, a 2020 graduate in Economics, International Affairs, Asian Religions & Cultures and Chinese is the son of Kim and Heath Anderson. He has been designated an alternate for a Fulbright Debate Coach/Trainer award in Taiwan. At WKU, Brian was a member of the national championship Forensics Team as well as a member of the intensive Chinese Flagship Program. A 2016 recipient of a Department of State Critical Language Scholarship, he also served in 2017-18 as a U.S. Department of State Virtual Student Foreign Service intern for the U.S. Embassy Beijing, compiling economic reports and helping to manage the Embassy Trade and Investment Weibo account. He is interested in the potential of strengthening international trade to enhance American national security.

Meg Dillingham, a 2020 graduate in Biochemistry, is the daughter of Catrice and Chris Dillingham. She has been designated an alternate for a Fulbright award that would fund the first year of a PhD at the Cancer Institute of University College London. A 2019 Goldwater Scholar, Meg conducted research at WKU with Dr. Sigrid Jacobshagen, professor of Biology, and Dr. Rodney King, professor of Biology. She also participated in WKU’s Genome Discovery and Exploration Program. Additionally, she completed two summer internships in the Johnathan R. Whetstine Laboratory at Massachusetts General Hospital Cancer Center and Harvard Medical School in Boston. This fall, she will begin a PhD in Systems Biology at Harvard Medical School.

Kate Hart, a 2019 graduate in International Affairs and Asian Religions & Cultures, is the daughter of Sally and Fred Hart. She has been designated an alternate for a Fulbright MA Degree award in Conflict Resolution and Mediation at Tel Aviv University (TAU). She has been offered support from another funding agency for the same program. Ultimately, she plans to seek a career in the federal government or nonprofit sector working with developing countries to address underlying causes of conflict.

WKU Fulbright US Student Program applicants work intensively with Melinda Grimsley in the Office of Scholar Development to conceptualize and develop their application materials over a period of weeks or months prior to the national deadline. Over time, they invariably get a clearer sense of their purpose while learning to present themselves in a compelling way to selection committees.  “Although I wasn’t selected as a finalist,” Kate said, “ the application process helped me feel confident that the TAU Conflict Resolution and Mediation MA program is the best fit for me.” Antonio said, “Staff in the Office of Scholar Development truly want students to succeed and they provide endless resources to help students not only grow and fulfill their goals and dreams but to also make a global impact. It is no surprise that Hilltoppers are selected for the Fulbright program every year.”

Students and recent alumni interested in discussing the program are encouraged to schedule an appointment by emailing osd@wku.edu. The campus deadline for the 2021-22 grant year is September 7, 2020.

The Fulbright Program is the flagship international educational exchange program sponsored by the U.S. government and is designed to forge lasting connections between the people of the United States and the people of other countries, counter misunderstandings, and help people and nations work together toward common goals. Since its establishment in 1946, the Fulbright Program has enabled more than 390,000 dedicated and accomplished students, scholars, artists, teachers, and professionals of all backgrounds to study, teach and conduct research, exchange ideas, and find solutions to shared international concerns. The Fulbright Program is funded through an annual appropriation made by the U.S. Congress to the U.S. Department of State. Participating governments and host institutions, corporations, and foundations around the world also provide direct and indirect support to the Program, which operates in more than 160 countries worldwide.