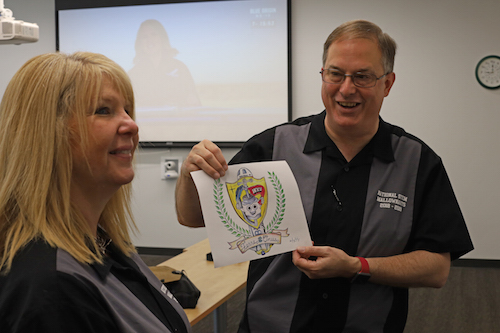 The National Stem Cell Foundation (NSCF) has announced that for the first time in the history of space travel, a marshmallow “astronaut” named Marvin traveled into outer space in an experiment designed by the 2018 class of the National STEM Scholar Program. During lift-off, travel, and touchdown, the experiment was recorded, examined, and measured to provide unprecedented data to middle-school classrooms across the U.S. who’ve designed a spacesuit to keep Marvin safe. The experiment went up from the Blue Origin launch facility in West Texas.

“This is an extraordinary opportunity for students to take their work from the classroom and literally launch it into outer space," said Dr. Paula Grisanti, National Stem Cell Foundation CEO. “We are proud to partner with The Gatton Academy of Mathematics and Science on the campus of Western Kentucky University (WKU) to ignite the imaginations of students across the country and inspire a new generation of STEM (science, technology, engineering, and math) pioneers.”

The 2018 National STEM Scholar class utilized space travel as a theme to develop an engineering design project for their middle school students to address Next Generation Science Standards related to material physical properties and pressure: create a safe spacesuit for a marshmallow astronaut named Marvin – the world’s first Mallownaut.

“If we don’t excite students about science in middle school now, we run the risk of being unable to fulfill critical, high-demand STEM jobs in the future,” said Rico Tyler, SKyTEACH Master Teacher in the WKU College of Education and Co-Director of the National STEM Scholar Program.

To execute the project, Marvin was carried in a NanoLab onboard Blue Origin’s New Shepard suborbital rocket during a launch past the Kármán line – the internationally recognized boundary of space. The Nanolab is about the size of a full-size Kleenex box and designed with miniaturized circuitry and cameras to launch experiments briefly into space for study and problem solving in microgravity.

When astronauts launch into space, their spacesuits protect them from multiple physical challenges. A bulkier spacesuit offers greater protection, but too much weight can crush the astronaut on ascent or descent. Once the spacecraft exits the earth’s gravitational pull, the suit becomes weightless.

Middle school engineering teams in 30 STEM Scholar classrooms in 20 states have worked to determine the maximum weight Marvin can support on Earth, then design a suit that’s heavy enough to protect him - but won’t crush him on lift-off or re-entry. Students will share data between schools and predict the maximum weight of the suit that will protect him without injury during sub-orbital flight. A team of scientists at STEM Scholar Program partner Gatton Academy will also make predictions. The data will be collected, graphed, compared and used as the basis for future projects.

About the National Stem Cell Foundation

About The Gatton Academy

Established in 2007, The Gatton Academy is Kentucky’s first residential 2-year STEM program for gifted and talented junior and seniors.  Students at The Gatton Academy’s enroll as juniors and are full-time WKU students pursuing their interests in advanced science, technology, engineering and mathematical careers. The Gatton Academy has been named to The Washington Post’s list of top-performing schools with elite students for nine consecutive years and was named the number one public high school in the United States by The Daily Beast for three consecutive years – 2012, 2013 and 2014.

WKU College of Education and Behavioral Sciences leads the way to diversity, equity, and inclusion in the teaching profession.

Global Learning & International Affairs (GLIA) is excited to share a recent addition to the Global Learning Forum: Around the World in Quarantine Days podcast series.

Folk Studies graduate student Ellie Dassler was recently featured in the WKU News for her research associated with the capstone project she is completing as part of her program.