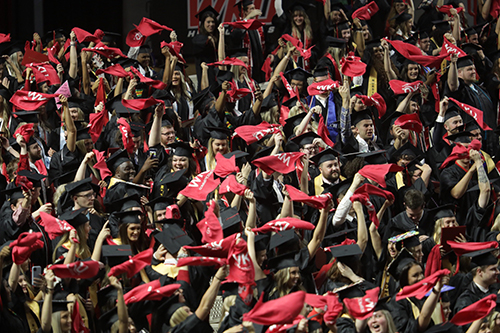 During the Fall 2022 recognition ceremonies at Diddle Arena, WKU will confer 967 degrees – 19 doctoral, 177 master’s, three specialist, 717 bachelor’s and 51 associate – as well as 69 undergraduate and 22 graduate certificates.

The schedule is as follows:

Ceremonies will include the ceremonial conferral of degrees, remarks from college deans and recognition of scholars. The graduates also will be individually recognized and shake hands with President Timothy C. Caboni.

Maria Wells of Lewisburg, an Economics major with minors in Business Administration and American Sign Language Studies, will be recognized as the Ogden Foundation Scholar during the 11 a.m. ceremony. WKU’s top undergraduate academic award is presented to one graduating baccalaureate degree senior who has demonstrated exceptional academic achievement and outstanding university and civic engagement. (Read more about the Fall 2022 Ogden Scholar)

The ceremonies will be broadcast on WKU PBS and on the WKU Facebook page and WKU YouTube channel. (More: Recognition Ceremonies Program; Event Parking Information)

Other fall graduation celebrations include: