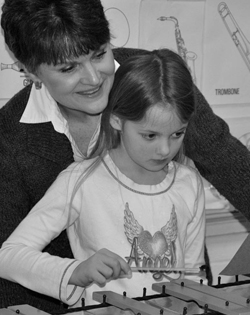 Pamela Livingston Thurman (WKU B.M. Ed., 1976 and M.A. Ed., 1996) began her music education at age five on piano. Pam’s parents, music educators David and Joyce Livingston, demonstrated a love for young people and an enthusiasm for teaching. Because of their influence Pam decided she would be a teacher, performer, arranger and composer of music.

Her high school band director, Cecil Karrick, suggested Pam play oboe, and also taught her to arrange music for high school band. Upon graduation, she received a scholarship and continued her studies on oboe with Bruce Morrison at the University of Kentucky. Later, Pam transferred to Western Kentucky University to study orchestration and arranging with her father, (WKU music faculty 1965-1990), and oboe with Benjamin Woodruff. While a student at WKU, Pam spent a semester studying oboe at the Hochschule fur Musik in Vienna, Austria with Hans hadamovsky and Hans Kautsky.

Between 1977 and 2000, Pam taught music at all levels in public and private schools in Kentucky and Minnesota. Pam taught three and a half years as adjunct faculty for WKU Department of Music in music education before returning to fulltime teaching in public school.

In 2000, Pam and her husband Michael (WKU B.M., 1978 French Horn) served as founding members of Orchestra Kentucky, under the direction of Jeffrey Reed. Principal oboist, Pam also arranged hundreds of compositions for the orchestra. In 2009, Pam connected her job as elementary music teacher to the orchestra in a unique way, collaborating with Glen Rice to compose Lincoln: A Man for All Times, in celebration of the bicentennial of Abraham Lincoln’s birth. This children’s musical (endorsed by the Kentucky and the National Abraham Lincoln Bicentennial Commissions) focuses on Lincoln’s life from his birth in Kentucky to his presidency, and was presented to over one thousand area school children with Orchestra Kentucky in 2009 through a grant from the Kentucky Arts Council. Pam Thurman also composed the orchestral score and directed a cast of over one hundred students from her school, Richardsville Elementary, in the production.

Pam’s awards include the Bowling Green Human Rights Commission Women of Achievement Award in the Arts in 2008, and Kentucky Music Educators Association Third District Elementary Music Teacher of the Year in 2008-2009.