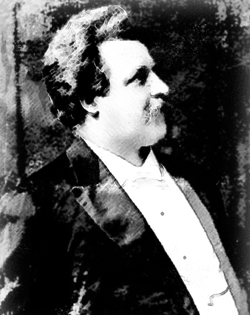 Franz Joseph Strahm was born May 14, 1867 in Freiburg, Germany. His early education was received in German public schools from which he graduated in 1879 and from high school in 1882. He was awarded a scholarship to the Royal Conservatory of Music in Soudershausen, Germany and was later given a position in the Royal Court Orchestra as a violinist.

While at the conservatory he was a student of the great pianist Alfred Reisenauer and also studied with Professor Adolph Schultze and Carl Shroeder, all of whom were men of international reputation as musicians and composers. He studied piano under Franz Liszt before coming to the United States in 1891 to play in a Nashville orchestra and teach at the Nashville Conservatory of Music. In Nashville, he was president of the Tennessee Academy of Music and Director of Music for the Monteagle Assembly, a position he continued to hold after moving to Kentucky.

He became director of Western’s Music Department in 1910, a position he held until 1935, and he afterwards taught on the music department faculty until his death on June 26, 1941. His teaching assignments in 1926 included serving as the first director of the Western band. Under his leadership, the band grew to 30 members and secured $2,000 worth of new band instruments.

Active throughout his life as a composer, his numerous compositions included the “Kentucky State Normal March” (1911) and the “B.G.B.U. March” (1919), written for the Bowling Green Business University. Other works include the music to “College Heights”, Western’s alma mater, large choral works, including a mass, and solos for pianos, violin, and voice.

During his distinguished career he was a director of bands, orchestras, and choirs, a concert pianist, and an organist. He was responsible for bringing high European expectations to the music program at Western Kentucky University and did much to establish the traditions of excellence in place today. In memorial, Franz J. Strahm was identified as one of the most active workers on behalf of true music education.