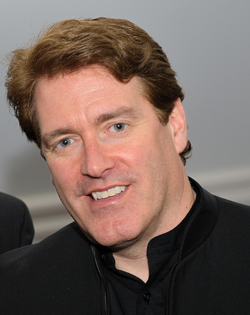 Timothy Simpson, a native of Bowling Green, Kentucky, received his Bachelor of Music Education degree at Western Kentucky University in 1984 where he was designated the Outstanding Music Student for that year.  While at Western, Mr. Simpson gained valuable experience by participating in productions of the Opera Theater Program under the tutelage of Virgil Hale and Bill Leonard.  In 1986, he received his Master of Music at the Eastman School of Music.  He has studied with Charles Hausmann, Elizabeth Volkman, Marcia Baldwin, Raphael Ortiz, and Enrico Di Giuseppe.

Prior to securing his first engagement in Bremerhaven as a lyric tenor, he was a member of the Opera Apprentice Program at the Chautauqua Opera in New York for two summers and a member of the Zürich Opera Studio.  Other important engagements include Osnabruck, Karlsruhe and the Schillertheater in Wuppertal/Gelsenkirchen, Germany.

Mr. Simpson possesses an active repertoire of over 50 roles, identifying him as one of the more versatile tenors in opera.  As a result of his extensive concertizing in Europe, he has been privileged to sing in many of Germany’s most renowned halls, including Festival House Baden-Baden, Die Alte Oper in Frankfurt and the Wuppentaller Stadthalle.  Moreover, he has had the opportunity to work with some of Europe’s finest conductors, including Wolfgang Seeliger, Nicolas Harnoncourt, Ralk Wikert and David Efforn.  Mr. Simpson has also performed on German National Television and Radio.

His summer activities have included appearances on the Eutline Festival near Lübeck and Musik und Theater Saar near Sarrbücken.  In addition to his operatic activities, he concertizes with orchestras on a regular basis as well as gives recitals with his wife and accompanist, Amy Duran.  Timothy Simpson is a wonderful example of local talent nurtured and trained in the WKU Music Department who has, with considerable talent and hard word, established himself as an internationally acclaimed musician.  In future years, Mr. Simpson will continue to pursue his career in the United States while maintaining many of his European engagements.