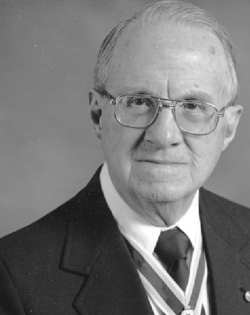 From 1935-1942 he was a director of bands and choruses in the public schools in Iowa and Illinois and assistant professor of music at Carthage College in Illinois. In 1945 he became associate professor of music at Western Kentucky State (now Western Kentucky University). His teaching included music theory, keyboard, choral methods, music education, private studios in piano/organ and director of chorus. He developed a five-year curriculum for a double major in music education and elementary education just before his retirement in 1977.

In 1950 he became the founder and editor of the Bluegrass Music News. He served as president of the Kentucky Music Educators Association from 1963-1965, and for numerous years, managed the KMEA high school music festivals held on Western’s campus. He was a charter member and sponsor of Western’s Phi Mu Alpha Sinfonia chapter and was a member of Phi Delta Kappa. Active in the community, he served as a board member and president of the Bowling Green Community Concert Association, organist and choir director at Bowling Green’s First Christian Church, president and secretary emeritus of the local chapter of the Charles Duncan Chapter of Sons of the American Revolution, president of the Kentucky Society S.A.R., and trustee of the National Society Medal and Silver Good Citizenship Medal, and became eligible for membership in the National Society Sons of the American Colonists.

He was active in the Bowling Green Kiwanis, where he served as president in 1965, secretary-treasurer from 1968-1990, received the Kiwanis International Legion of Honor, the Kiwanis International Hixon Fellowship, was names Most Outstanding Kiwanian of the Year in 1962, and had 32 years of perfect attendance. He was a member of the Bowling Green Lodge #73 Free and Accepted Masons. He was a distinguished member of the Honorable Order of the Kentucky Colonels.