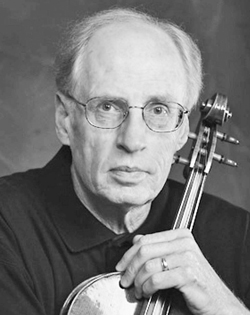 Dwight Pounds received his Ph.D. from Indiana University where he studied viola with William Primrose and Irvin Ilmer. He is a native of West Texas where he was one of the founding members of the Midland-Odessa Symphony and Chorale. He is Professor of Music (Emeritus) at Western Kentucky University in Bowling Green, having taught there for 33 years before retirement in 2003. While at Western he taught music appreciation for music majors and non-majors, including a section for honors students which he founded. His other course responsibilities included music theory, string techniques, and applied music.

He was principal violist in the orchestra and served on the founding board of the Bowling Green Western Symphony Orchestra. He retired with the rank of colonel following 30 years service with the U.S. Air Force and the Air Force Reserve, including 13 years with the Kentucky Air National Guard. He currently serves as Retrospectives Editor of the Journal of the American Viola Society (JAVS) and is a frequent contributor of articles, reviews and photographs.

Some thirty photographic images he has taken at viola congresses are on permanent exhibit at the Primrose International Viola Archive (PIVA). Subjects include William Primrose, Walter Trampler, Donald McInnes, David Dalton, Franz Zeyringer, Myron Rosenblum, Maurice Riley, Marcus Thompson and many more. His photographs and articles have also been published in Strings, The Strand, and The American String Teacher. One of his prize-winning photographs was part of Visions Kentucky 2003 at the Governor’s Mansion, Frankfort, Kentucky, where he was an invited exhibitor.

He is author of The American Viola Society: A History and Reference and a pedagogical book, Viola for Violinists: The Violin to Viola Conversion Kit, which will soon appear in German edition. He has an academic minor in German Studies and served as interpreter for IVG Presidents Franz Zeyringer and Gunter Ojstersk during their visits to North American viola congresses, and has presented papers in the German language at Congress XVI in Kassel (1988) and Congress XXIV in Markneukirchen (1996). His recognitions from the American and International Viola Societies include the AVS Distinguished Service Citation (1985), Maurice W. Riley Award (1997), and the IVS Silver Viola Key (1997) which was presented by IVG President Gunter Ojstersk at Congress XXV in Austin, Texas, for international cooperation. Dr. Pounds has been active in American Viola Society leadership for 30 years and served two terms as the society’s Vice President. He also served as the first Executive Secretary of the International Viola Society for North America. Dr. Pounds plays a 17.1” (435 mm) viola crafted by Nicholas Frirsz.