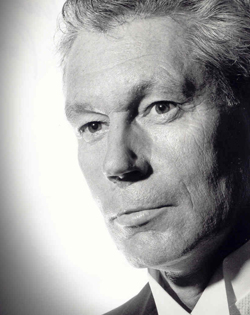 Ohm Pauli, a native of Missouri, earned his B.M.E. from North Central College in 1941 while of full scholarship.  He received his Master of Music degree from Northwestern University in 1941.  Before coming to Western, Mr. Pauli taught in the public schools as a choral director of Berkley High School in Berkley, Michigan (1941-1942).  After four and one-half years in the U.S. Navy, he continued his teacher career as an assistant professor of the voice at the Univeristy of Wichita (1947-1951).  In 1951, Mr. Pauli became the director of choral music at Bell Gardens High School in California.

Mr. Pauli came to Western as Assistant Professor of Voice in 1955.  During his tenure at WKU, Mr. Pauli was also Director of the Western Choir and Madrigal Singers.  For the duration of his long teaching career, my Pauli made many contributions to his profession.  He has served as Lieutenant Governor in the National Association of Teachers of Singing, Regional Director of the Berea Conference and President of the Epsilon Kappa Chapter of Phi Delta Kappa.  He was also a member of Phi Mu Alpha, the American Association of Choral Conductors, and he was a Danforth Associate.

When he retired as a full Professor from WKU in 1982, Mr. Pauli had distinguished himself as a national-class vocal educator who took great pride in teaching and knowing his students.  Despite his many achievements, Mr. Pauli has modestly noted that, “I have probably had more good students than I have deserved.”  Many WKU vocal students believe however, that much of their musical success was due directly to Ohm Pauli.