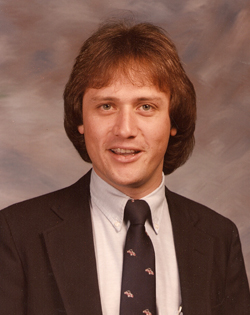 Gregory Lyons, a native of Leitchfield, Kentucky, has been actively involved in music education as a teacher on the middle and high schools levels in Kentucky public schools, and as the President and owner of Royal Music Company, Inc.  Lyons holds the Bachelor of Music and Masters of Arts in Education degrees from Western Kentucky University, where he served as a student conductor of many performing brass ensembles.  He was a distinguished member of the WKU Concert and Marching Bands, Symphony Orchestra, Jazz Band and other groups, including the Shaker Singers.  Lyons served two terms as President of the Iota Mu Chapter of Phi Mu Alpha. During his tenure at WKU, he twice produced the Miss Western pageant (a preliminary event for Miss Kentucky).

After graduation, Lyons served as Director of Bands at Muhlenberg Central High School, Meade County High School and Glasgow High School.  His bands consistently earned Distinguished Ratings in Grade V and VI at Concert and Marching Festivals and many of his students went on to major in music.

In 1986, Lyons was selected by Phi Beta Mu as the Outstanding Young Band Director in Kentucky.  His involvement with the Kentucky Music Educators Association includes serving as District President, District Band Chair, and representative to the Marching Band Board of Control.  Lyons was a member of the team that developed the Kentucky Selective Music List, which serves as the reference guide for band literature for KMEA Concert Band Festivals.

In 1991, Lyons and his wife Paula (also a WKU Music Department alum) bought Royal Music. Together, they have been a benevolent foundation of musical arts in Bowling Green, KY.    Lyons has grown and expanded Royal Music to be the primary resource for music educators in South Central Kentucky and Northern Tennessee.  Sought after as a clinician and adjudicator, Lyons remains immersed in music education on many levels. He has served on the WKU Alumni Association National Board of Directors and the Vestry at Christ Episcopal Church.  He is the proud parent of two musicians, Austin and Kristen.