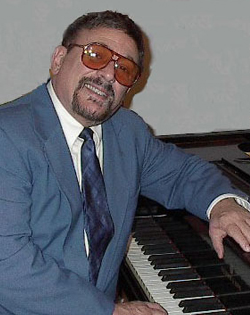 Mike Longo began his professional career at the age of fifteen in South Florida where he began working with his father’s jazz band. He actually began playing piano at age tree in Cincinnati, Ohio, his birthplace.  By age four, the family took him to the Cincinnati Conservatory where he began formal piano lessons.

After moving to Ft. Lauderdale, his professional career took root after winning a local talent contest at the age of twelve.  Cannonball Adderly, who was a band director in a local high school, heard Longo at a jam sessions and became interested in the young pianist.  Adderly began coaching Longo and later hired him to play with his quartet at the famed Porky’s that was depicted in the movies.

Longo attended Western Kentucky State University from which he earned a bachelor of Music degree in piano in 1959.  While attending school in Bowling Green, he began writing for the university lab band and supported himself by playing gigs in the Nashville area.  In his senior year, he won theDownbeat Magazine Hall of Fame Scholarship to Berklee School of Music.  He declined the scholarship and went instead on the road as a full-time professional jazz musician.

His early career was distinguished by associations with many jazz notables including Coleman Hawkins, Gene Krupa, Nancy Wilson, Jimmy McPartland, Joe Williams, Clark Terry, and Roy Eldridge.  In 1961, he was invited to study with his idol, Oscar Peterson, at the Advanced School of Contemporary Music in Toronto.  Those six months were “the most intense period of study in my life.”  Mike became a member of the Dizzy Gillespie Quintet in 1966, an association that continued for nine years, the longest of any pianist with a Gillespie ensemble.  A close bond of friendship and musical collaboration developed between the two that lasted until Gillepie’s death in 1993.  IN 1986, Longo was commissioned by Gillespie to compose a piece for full symphony orchestra which was performed by Gillespie 1993 with the Detroit Symphony Orchestra.

At present, he has 19 solo albums to his credit and some 50 recorded compositions, not to mention the numerous appearances he has made of other jazz artists’ albums.  He has also published six textbooks on jazz instruction, several of which are used at major universities.  According to one biographer, Mike Longo is one of those rare individuals who not only plays well, but is also a gifted teacher of jazz.  His teaching legacy is reflected in the works of his students, including James Moody and Ron Carter.