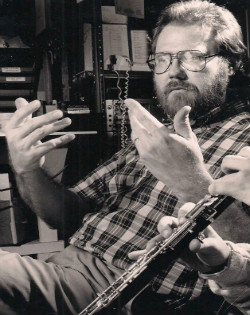 Musician-bassoonist-educator-instrument technician Larry Long is a native of Hopkinsville, Kentucky who earned his bachelor of music in education degree from Western Kentucky University in 1977 and his masters in music in bassoon from the University of Memphis in 1979.

Long, who taught high school band and choir in Dayton, Ohio and Warren County, Kentucky, has spent his professional career as a freelance artist and master teacher of bassoon and all woodwind instruments.  He served as interim faculty and adjunct instructor of double reeds at WKU where he taught double reed techniques and coached woodwind chamber ensembles.  His orchestra memberships include the Bowling Green Western Symphony, with whom he began as a student in 1973 and performed with professionally beginning in 1982.  From 1977-1979 he was a member of the Memphis Symphony Orchestra.  Throughout his career he performed regularly with the Evansville Philharmonic, Paducah Symphony, and was a member of the Owensboro Symphony Orchestra for 29 years.  As a multiple woodwind player, he maintained an active career in many pit orchestras, jazz bands, churches and community groups in the region and significantly contributed to WKU’s many orchestras and bands including the Lost River Cave Big Band and the Southern Kentucky Concert Band.

As founder and senior repair technician (woodwinds/brass) of Opus Horn Repair, long established a company of excellence who has served professional musicians and band programs locally, regionally and throughout the US.  He is a member of the National Association of Instrument Repair Technicians for whom he has presented numerous clinic sessions and workshops.