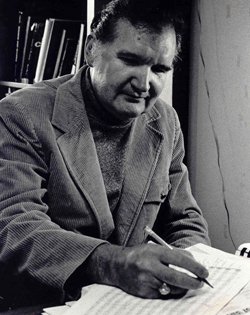 David Livingston earned his Bachelor of Science degree from Western Kentucky University in 1951 and his Master of Arts degree from the University of Kentucky in 1952.  His doctoral work was completed in 1971 at Ohio State University.  Dr. Livingston began his professional career in music at age 15, when he arranged and played for a dance band in clubs and on the radio.

After graduation from high school, he joined the army infantry but was later transferred to the Air Force to play with the 4th Air Corps Band at March Field, California.  After the war, Dr. Livingston began his long teaching career, starting as a band director first in Harlan County, Kentucky (1946-47), and then moving to Lee County, Kentucky (1952-53) in the same position.  He later served as supervisor of music for the Franklin County, Kentucky schools from 1953-63.

After eighteen years in the public schools, Dr. Livingston began his tenure at Western Kentucky University where he became a full professor and stayed until his retirement in 1990.  While at WKU, Dr. Livingston served as director of bands from 1965-69 and also taught theory, composition, woodwinds and other courses.

As a noted composer, his works have been performed by the Ohio State Symphonic Band, the Ohio All-State Band and the Detroit and Oklahoma City Symphonies.  Dr. Livingston composed the dedication music for the University of Kentucky’s Commonwealth Stadium in 1976 and for the Kentucky bicentennial celebration in 1986.

As a top jazz performer on saxophone and keyboard, he made two overseas tours with Billy Vaughn’s Hollywood Orchestra and has performed with some of the greatest jazz artists of our time, including Louis Armstrong and Dave Brubeck.  In 1997, Dr. Livingston received the Governor’s Award for the Arts in Instrumental Music.  “Doc’s” influence as a musician and teacher has touched and changed the lives of thousands of students and music lovers alike.