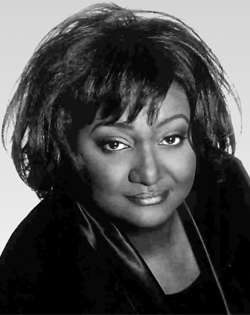 Sheila Harris Jackson is a native of Franklin, Kentucky. She graduated from Western Kentucky University in 1978 where she studied with Ohm Pauli. She subsequently attended the Curtis Institute of Music where she was a student of Todd Duncan, the original Porgy in Gershwin’s Porgy and Bess, Dr. Vladamir Sokoloff and Sylvia Olden Lee. During her studies she was an award winner in the National Association of Teachers of Singing competition, the recipient of the William Paterson University Scholar’s Award, the Lincoln Foundation Scholarship Award, the New Jersey Governor’s Teacher Award, the Western Kentucky Vocal Music Scholarship, and a complete scholarship and stipend to the Curtis Institute.

Mrs. Jackson has appeared with the Houston Grand Opera, the New York City Opera, the Pennsylvania Opera, the Nashville Symphony Orchestra, the Philadelphia Academy of Music, the Bermuda Fine Arts Festival and in the off-Broadway musical, Spectrum. She has also given performances at the Teatro Real (Madrid, Spain), the Bellini Opera House (Italy), the Bregenzer Opera Festival (Austria), Swnedis Musicaux de Chartres (France) and Carnegie Hall.

Her career has allowed her to work with conductors Andrew Litton, Leonard Bernstein Gian-Carlo Menotti and Christopher Keene. Other artists with whom she has collaborated include jazz pianist and educator Barry Harris, noted singer Roberta Flack and tenor George Shirley. She has concertized extensively throughout Europe and the United States, including a twenty-one concert tour of Italy.

One reviewer wrote of her performance “The Imposing Soprano, Sheila Harris Jackson, was superb in the arias (notably in Porgy and Bess) with her magnificent voice and strong dramatic presence.” In the words of her former teacher Todd Duncan, Sheila Harris Jackson not only sings with great beauty, she has total dedication and a burning desire to succeed. Those qualities were recognized when the mayor of her hometown declared Sheila Harris Jackson Day in her honor. Sheila has stated, “My singing is a spiritual calling. It is a gift from God. I not only enjoy it, I feel a great responsibility to share it with others.”