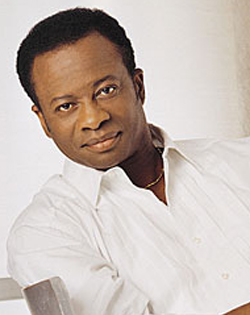 Larnelle Harris, a native of Danville, Kentucky, enrolled in the Music Department at Western Kentucky University in 1965, earning a Bachelor of Arts degree in music education in 1969.  Since graduation, Mr. Harris has become one of the great figures in modern gospel music.

He has earned five Grammys and ten Dove Awards, made numerous network television appearances and has scored more than a dozen number-one recordings.  He has performed for hundreds of thousands of people in several foreign countries, including Russia, South Korea and South Africa.  In 1992, Mr. Harris performed for President and Mrs. Bush in conjunction with the Points of Light Foundation.

His deep commitment to Christian values has brought him opportunities to perform for the National Caring Institute Awards, the movie Born Again,Promisekeepers Men’s Conferences, and World Vision for which he is the National Spokesman.  Other awards received include: 1981 Religion in Media Award; 1985, 1986 and 1987 Singing News Fan Award; 1986 Gospel Music News People’s Choice Award; 1988 Stellar Award; 1989 Cashbox Magazine Award; and 1991 Silver Bell Award for Distinguished Public Service.

Perhaps Mr. Harris’ career might be summed up by his statement, “…I want to sing songs that change people’s lives.”  Larnelle Harris serves as an inspiration and model for all WKU music students.