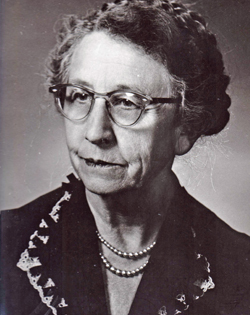 Nelle Gooch Travelstead graduated from Potter College for Women in 1907.  She received her A.B. degree from Western Kentucky State College in 1932 and earned her M.A. from Columbia University in 1938 while on scholarship.  She received additional training at New York University, Peabody College and the Hollis Damn School of Music.

During her 44-year career at Western Kentucky College, Mrs. Travelstead worked in the library, taught physical education, taught piano, and eventually served as Head of Music Education.  She was in constant demand as a clinician for elementary schools teachers and was routinely called upon to direct musical activities at schools and churches.

Mrs. Travelstead was active and held leadership in positions in many organizations such as KEA for which she was Chairman of the Music Division in 1918, the American Association of University Women, Women Federated Clubs, the League of Women Voters, and the Salvation Army.  Mrs. Travelstead demonstrated her concern for the American soldiers of World War II by establishing and running a canteen for service men in Bowling Green.  Additionally, she was President of the Warren County Chapter of War Mothers of America.  As a continuation of her ongoing service to Bowling Green, Mrs. Travelstead organized a boys’ club in one of the poorer sections of town.  Her many charities were not widely known, and she was reluctant to speak of them.

It is said the Nelle Gooch Travelstead was many things to people: to a homesick freshman, a comforter; to a needy family, a benevolent Samaritan; to a lazy student, a tormentor; and to all who knew her, an amazing person.  To her students, she was a superb individual known for her incomparable ability to teach and for her indomitable character which will live for years to come in their memories.