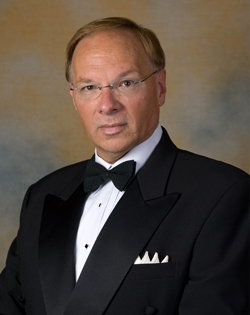 David Paul Gibson, a native of Louisville, Kentucky, has been active in the arts and education communities as a teacher on the high school and college levels, conductor, composer, vocal performer, theatre artist, church musician and arts administrator.  Mr. Gibson holds a Bachelor of Music in Education degree and Master of Music in Vocal Performance degree from Western Kentucky University, where he performed numerous operatic roles, including Marcello, Figaro, Germont, Peter Abelard, and Rigoletto, while studying voice under Ohm Pauli and Dr. Virgil Hale.  While a student, Gibson composed, staged and conducted his first opera, Antony and Cleopatra, for its world premiere at WKU.

Mr. Gibson was the founder and first conductor of the Southern Kentucky Opera Guild and the Bowling Green Community Chorus, as well as the Opera Theatre of Owensboro.  Gibson served as artistic director of the Old Rockport Civic Theater for seven seasons and, during the course of his career, has designed, directed and conducted over one hundred productions of opera, musical theater and drama ranging from Puccini’s La Boheme to the works of Tennessee Williams and Lerner & Lowe.

In 1983, the National Endowment for the Arts selected Gibson a Spoleto Fellow at the Festival of Two Worlds, where he assisted its director Gian-Carlo Menotti. In 1989, Gibson was chosen to address the general body of the International Wagner Symposium held at the Julliard School, New York.  As a singer, Gibson performed on the concert and operatic stages throughout the United States, Europe and locally with the Kentucky Opera, the Louisville Orchestra, the Evansville Philharmonic, and the Louisville Bach Society.

In 2008 the Bowling Green-Western Symphony commissioned and premiered his In Celebration of Music for its centennial season.  Mr. Gibson has served as Director of Music at several churches throughout his career, including The Presbyterian Church of Bowling Green, and has served as adjunct faculty in WKU’s Department of Music.