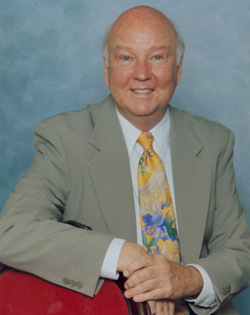 Gregory Colson grew up in Middlesboro, Kentucky.  After a bout with polio during his junior year in high school, Mr. Colson entered Western Kentucky University in 1946.  While at WKU, he was elected Mr. Freshman, Mr. Sophomore and a Campus Favorite in both his junior and senior years.  He also served as organist of Christ Episcopal Church and First Presbyterian Church, as well as the WKU Chapel pianist for four years.

He received a B.A. in Piano with an education Minor in 1950.  Colson then moved to Nashville where he attended Peabody.  Not only did he receive the M.A. in Piano and the M.M. in Church Music from Peabody, he also met his wife Betty while taking graduate classes.  In 1960, “The Greg Colson Show” won the Connie Award for the Best Musical TV Show in the Southeast. His word as choral conductor at St. George’s Episcopal Church led to the collaboration of 54 major words with the Nashville Symphony from 1964 to 1968.  The Colson’s moved to Atlanta in 1968 where Greg Taught at Emory, Georgia State, The Lovett School and Georgia Tech. His academic career culminated in 21 years at Georgia Tech University as Director of Choral Activities and head of the Music Department.  He retired from Tech in 1997 and was subsequently made an honorary alumnus.

Mr. Colson has made more than 30 trips to Europe for study and performance.  His career as a church musician has stretched for more than 50 years, and he has conducted more than 500 concerts of major for works for choir and orchestra.  He is a member of the Royal College of Organists in England and The American Guild of Organists.  Since 1990, Mr. Colson has performed as pianist for the BMI Award Events in Los Angeles, Las Vegas, Nashville, Miami and London.  He has received outstanding reviews from appearances in German Opera Houses and a summer concert in Moscow.

Most recently, Mr. Colson has produced a catalog of 20 CD albums featuring the great popular songs of the twentieth century.  His playing has been praised as being technically brilliant with effortless flow of rhythm, sophisticated harmonies and a beautifully tuneful style.  It has been said that nobody plays the great songs better than Greg Colson.