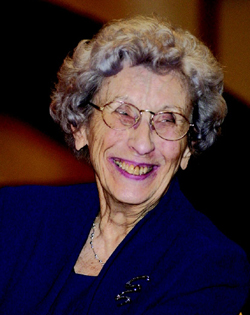 Hazel Carver graduated from Western Kentucky Teachers College in 1938 with a B.A. in Public School Music.  She earned her degree after only three years.  While at Western, Hazel Carver studied violin with Hugh Johnson and piano with Franz Strahm, who had studied piano with Liszt in Europe.  Her first music teaching position was at Hughes Kirk High School in her native Muhlenberg County, a job she held for four years.  She married Marvin Carver in 1939 and moved to Russellville, KY, in 1942, where she became the music teacher for the entire city school system.  In 1942, she began her work as an organist and choir director (not always concurrently) at the First Baptist Church of Russellville, retiring in 2002.  She earned her Masters Degree in Music Education from Western in 1962.  Eventually, Mrs. Carver became the choral and band director for the flourishing high school music program, a position she held until her retirement in 1977.

When she left public school teaching, she was persuaded to assume the role of  Editor of the Bluegrass Music News, the official journal of the Kentucky Music Educators Association (KMEA).  Through her extensive and excellent service she has become a KMEA legend.  Her quick wit, exuberant energy and passion for music making has been an inspiration to all who know her.

Under her leadership, the magazine evolved from a newsletter to a nationally recognized publication with worldwide circulation.  She has twice been recognized as a Kentucky Colonel and she has received citations of recognition from both the Kentucky House of Representatives and Senate.  Her exemplary life as a musician and her love of music is clearly reflected through the accomplishments of her many students.  According to her many advocates, Hazel Carver is one of the talented musicians ever to come out of Kentucky.