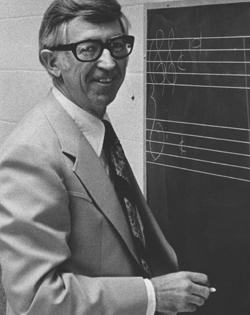 A native of Natural Bride, New York, and Carpenter earned his B.S. degree in Music Education in 1942.  He also received the M.M. degree (1948) and a Ph.D (1953) in composition from the Eastman School of Music at the University of Rochester, New York.  His composition teachers included Howard Hanson and Bernard Rogers.  He also received minors in Musicology and Theory during his graduate study.  Throughout his distinguished career, Carpenter has been active as a performing musician, both as a conductor and instrumentalist.  He was an Army Band leader for four years, organist and choir director at Broadway Methodist Church for six years, Principal violinist of Nashville Symphony for seven years, violinist and celesta player in the Rochester Philharmonic for three years, recording artist in various Nashville studies, and a member of various string quartets at various times of his life.

He was highly distinguished as a composer, having received numerous accolades for his Symphony in D and also as author among whose writings is “Kentucky Music,” a book that described musical aspects of Kentucky culture and tradition.  Indicative of his general scholarship and lifelong love of learning, Carpenter received a Diploma from the Goethe Institute, Schwäbisch-Hall in 1970. Professional memberships included: Phi Mu Alpha, Pi Kappa Lambda, KMTA, Southeastern Composers’ League, Phi Delta Kappa, Alpha Sigma Omicron, Blackfriars, KEA and MENC.

Dr. Carpenter retired from WKU in 1984 after thirty-one years of outstanding service.  His colleagues have characterized him as being very supportive, widely respected, encouraging and even-handed.  Howard Carpenter exemplified a wonderful blend of administrative skill, academic scholarship and musical ability that together ensured his loft place in the history of WKU music.