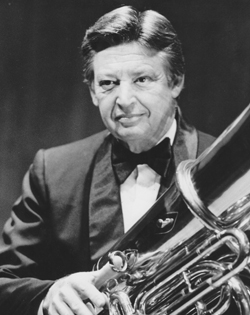 Dr. Campbell brought the WKU bands to a heightened level of musicianship and activity.  Under his leadership the “Big Red” Marching Band grew to its largest membership ever.  His Wind Ensemble performed on tour at numerous high schools and for the KMEA State Conference.  During his tenure as Director of Bands at Western, the staffing of the band program grew to include an Associate Director of Bands and two positions for graduate assistants.  He brought the KMEA State Marching Band Contest to Western’s campus for the first time in 1988 and was instrumental in establishing the Kentucky All-Collegiate Band which performs each year at the KMEA State Conference.  His work in recruiting, retaining, teaching, and inspiring both undergraduate and graduate music students has had a profound influence on music and music education at Western and throughout the state of Kentucky.