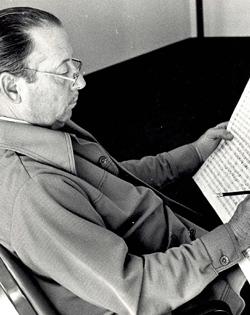 Bennie Beach, a native Mississippian, earned his undergraduate degree from Delta State University in 1948 after a tour of duty in the Army Air Force from 1943-46.  His first teaching position was director of bands in Cleveland, Mississippi, 1948-49.  In the summer of 1950, Bennie became a member of the Nashville Symphony Orchestra trumpet section, a position he held until 1975.  He began his graduate work at George Peabody College-Vanderbilt in Nashville, Tennessee in 1951.  While in graduate school he studied composition privately with Roy Harris for two years, and also studied with Nicolas Slonimsky, Philip Slates, John Boda, Howard Hanson, Ernst Krenek and William Schuman at various other times of his life.  He received a M.A. degree in Music in 1951 and a M. Ed. Degree in 1951, both from Peabody College.

After serving as director of bands at Nashville’s Litton High School from 1952-53, he became a member of the music faculty of Western Kentucky University in the fall of 1952 where he taught theory, composition, brasses and conducting.  While at Western he was responsible for the development of the brass ensemble program.  He also served on numerous campus-wide committees.  Professionally active throughout his career, he was vice-president and composition chairman of the National Association of College Wind and Percussion Teachers.  Other memberships held include MENC, ASCAP, National Federation of Musicians (since 1940), Phi Mu Alpha and the Warren County Kiwanis Club.  In 1965, he was awarded the designation of Kentucky Colonel.  He also served as the official state bugler of Kentucky from 1964 into the 1980’s.  Delta State University named Bennie Beach their Alumnus of the Year in 1975, and he was inducted into the DSU Music Hall of Fame in 1976.  Also in 1976, he was named Kentucky Composer of the Year by the Kentucky Music Teachers Association.

Professor Beach has written extensively for vocal and instrumental mediums.  As a result of his artistic success, he has been awarded numerous commissions.  Notable among his many honors are two premier performances in Carnegie Hall.  He retired from WKU in 1981.  Ever the innovator, he coined the word Harmatonality  to describe his unique tonal-atonal approach to writing music.  Bennie Beach has been characterized as a fully dedicated teacher, one who remained consistently devoted to the welfare and musical development of his students.