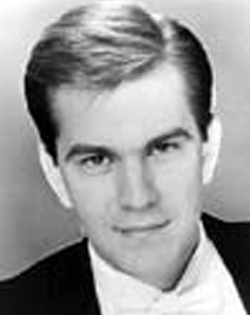 Ted Barr, WKU ’84 alum, is a musician of widely varying skills. Trained as an organist and holding an advanced degree from Westminster Choir College in Princeton, NJ, he has also studied voice extensively with internationally renowned pedagogue Maria Farnworth in New York City. His organ studies were with Wayne Hobbs in Kentucky and McNeil Robinson, chairman of the organ department at the Manhattan School of Music. Having spent more than sixteen years teaching in higher education, Barr currently devotes his energies to organ performance and choral music as a full-time church musician and organ recitalist. He is director of music and organist at Trinity Presbyterian Church (USA) in Cherry Hill, NJ, where he leads a music ministry program and community concert series for a suburban Philadelphia congregation of 1,100 members. Barr’s recent organ performances include the Church of St. Mary the Virgin (New York City), National City Christian Church (Washington, DC), and multiple performances in Westchester County, NY, and Monmouth and Camden Counties in New Jersey.

Barr served on the voice faculties of Westminster Choir College, Rutgers University (on both the New Brunswick and Newark campuses), and Wagner College on Staten Island. His students have appeared in the Broadway revivals of Follies, Nine, and Big River. In addition to appearing in both the Moscow and Broadway productions of 42nd Street. His students have also appeared with the Cleveland Opera, the Cleveland Orchestra, and the Staten Island Symphony. His organ students include internationally recognized organist F. Anthony Thurman of New York City, formerly of Bowling Green, KY.

Barr has been tenor soloist with choral societies and opera companies in New York, New Jersey and Pennsylvania. As a choral singer, he has performed with the Philadelphia Orchestra under the baton of Riccardo Muti, with the New York Philharmonic under the batons of Raphael Kubelik and Kurt Mazur, with the St. Moritz Festival Choir (Switzerland) and the Hungarian Philharmonic conducted by Sir Neville Marriner, and with Westminster Choir under the direction of Joseph Flummerfelt.

Also a composer and arranger, Barr’s works have been performed at the United States Military Academy’s Cadet Chapel (West Point, N.Y.), in various churches throughout the Northeast, and at New York City’s Snug Harbor Cultural Center. His choral arrangements of Shaker spirituals have been recorded by the South Union Quartet on the Julep Music label. He is an active member of the New York City Chapter of the American Guild of Organists and the Presbyterian Association of Musicians.