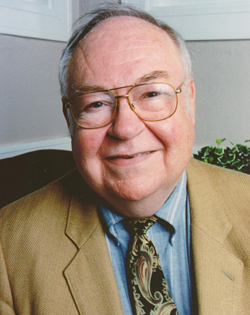 Charles H. Ball earned a Bachelor of Science and a Bachelor of Arts degree at Western Kentucky State College in 1954.  His Master of Music degree was awarded by Michigan State University in 1958, and he completed his Ph.D. at George Peabody College in 1964.

His first full-time teaching position was at Lindsey Wilson College as a Professor of Music from 1958-60.  From 1962 to 1966, Dr. Ball served on the faculty of Austin Peay State College, earning the rank of associate professor in 1965.  After leaving Austin Peay, he took a position as associate professor on the faculty of George Peabody College from 1966-69, after which he became a full professor and Director of the School of Music from 1969-73.  At the University of Tennessee, Knoxville, he served as Professor and Head of the Department of Art and Music Education from 1973-1991 and Professor of Music and Coordinator of Music education from 1991 to his retirement in 1996.

During his distinguished career, Dr. Ball published several important contributions to the music education literature; including a book entitleMusical Structure and Style and a chapter, “Thoughts on Music as Aesthetic Education,” in the famous MENC publication, Toward an Aesthetic Education.  He has also had numerous articles published in professional journals including, The Music Educators Journal and The Bulletin of the Council for Research in Music Education.

As measure of his peers’ respect, Dr. Ball has held a number of important leadership positions in the profession including: President, The Tennessee Music Educators Association; Chairman, The Tennessee Alliance for Arts Education; Treasurer, The Southeastern Choral Conductors Conference; Treasurer (two terms), The National Association of Schools of MENC, and the Task Force on Music Teacher Certification for NASM.  Dr. Ball’s career represents an uninterrupted contribution of instructional, scholarly and administrative excellence to the field of music education.  As a WKU alumnus, he has highly distinguished himself within his profession and is thereby chosen for this high honor.