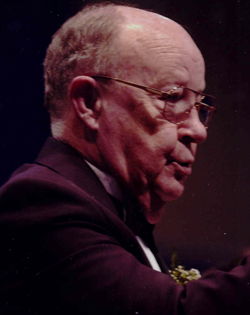 Joe Allen, a native of Muhlenberg County, began his teaching career in 1960 at Providence High School after graduating with the first bachelor of music education degree ever awarded at Western Kentucky Teachers College that same year. While at Western, he studied the baritone horn with Bennie Beach. He later taught at Charleston, Missouri, and Muhlenberg Central, earning a Master of Music Education degree at WKU in 1966.

After an eleven year hiatus, he rejoined the teaching profession as band director at Lone Oak High School in Paducah, Kentucky. The next year he returned to Muhlenberg Central and in 1990 was named director of bands at Muhlenberg North High School in Greenville, Kentucky. His bands have consistently been high quality performers on the marching field and concert stage at district, region and state music festivals. Additionally, he has conducted honors bands in Kentucky and Tennessee, and has been in demand as an adjudicator for marching, concert and solo and ensemble festivals throughout the region.

He has served as Kentucky Music Educators Association Third District President, Third District Band Chairman, All-State Band Chairman, and President of Phi Beta Mu. He was named “Band Master of the Year” in 1997 by Phi Beta Mu, and was chosen as the Kentucky Music Educators Association High School Teacher of the Year in 2002. He has received the Citation of Excellence from the National Band Association for both marching and concert band.