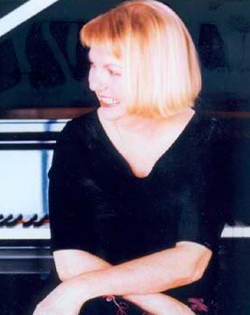 Kentucky native, Beegie Adair is a working musician, recording artist, performer, clinician, and teacher. Her credits encompass virtually all aspects of the music business. She grew up in Cave City and studied piano from the age of five. After graduating from Western Kentucky University in 1958, she began her career as a teacher but quickly moved into radio, television, and studio work.

She was located in Nashville during the heyday of country music, allowing her the opportunity to accompany such legendary performers as Johnny Cash, Dolly Parton, Neil Diamond, Peggy Lee, and Mama Cass Elliot. She also was the staff pianist for the WSM-Radio and Television, and served as a singer on the WSM-Radio's 'Walking Crew." As a studio musician and vocalist, Adair has recorded with such diverse artists as Perry Como, J.J. Cole, Connie Francis, Al Hirt, Englebert Humperdink, Eddy Arnold, Jerry Reed, Petula Clark, and Mickey Newbury. She has appeared on NBC's "Today Show", "Kraft Music Hall", "The CMA Awards", and "The Grammy Awards." She has concertized with Nat Adderly, Lew Tabackin, and Urbie Green on American Jazz Radio.

Her piano playing is heard on many movie soundtracks, including, “Smoky and the Bandit,” “The Villain,” “Every Which Way But Loose,” and “Perfect World.”  Her writing credits include jungles for Gulf and Western, HCA, Quincy’s, Texize, American General and Wrangler. Beegie has appeared on Marian McPartland’s “Piano Thoughts.”

Ms. Adair has served as an adjunct lecturer in Jazz Studies at Vanderbilt University’s Blair School of Music and has a passion for promoting the art of jazz.  In 1998, she received the Nashville Music Award for Jazz Album of the Year.  Beegie is noted for her ability to make a quality jazz interpretation out of any good melody.  In doing so, she is able to connect the art of jazz to a wider audience.  She currently records on the Hillsboro Jazz label in Nashville and has several solo albums to her credit.