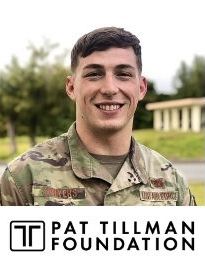 In recognition of their service and leadership potential, Tillman Scholars receive scholarship funding to pursue higher education and continue their service in the fields of healthcare, business, law, public service, STEM, education and the humanities.

“The Pat Tillman Foundation encourages and empowers leaders that are fueled by passion, sharpened by scholarship, and are selflessly committed to making a positive impact on the world around them,” said Sawyers. “These are all concepts that I take very seriously, and I am proud, but also humbled at the same time, to be recognized as such.”

A student in the WKU Department of Sociology & Criminology, Sawyers is pursuing a career fighting for fostered youth. He transitioned between eleven foster homes and two residential treatment facilities in his youth, which inspired him to combat the cyclical nature of abuse, stigma, neglect, and instability he experienced, then studied, and will now fight to change through child advocacy and evidence-based policy reform.

After over seven years of active duty in the Air Force, Sawyers will utilize the Department of Defense SkillBridge Program to complete his sociology degree while completing three consecutive internships at the Colorado Center for Policy Research, Court Appointed Special Advocates (CASA), and the Rocky Mountain Child Law Center. Upon graduation, he will transition to law school to pursue a legal career in child advocacy.

“Once you start looking for opportunity and realize how close it is, you will start to see it everywhere,” Sawyers said. Through two deployments to the Middle East and a four-year deployment to Japan, Sawyers served local youth through English lessons and food drives--all while pursuing a criminology degree through WKU Online.

Upon referral by WKU Military Student Services, Sawyers worked with Lindsey Houchin, Coordinator of Nationally Competitive Opportunities in the Office of Scholar Development, to prepare his application. Sawyers encourages other students with big dreams to “start small and start early,” seeking guidance from campus resources like those he utilized, even from Japan.

“The Office of Scholar Development is full of experts who are passionate about seeing you thrive,” he said. “They will harness your story, give you advice on how to organize it, and take true ownership in seeing your development through.”

In preparation of his application, Sawyers reflected on the formative experiences that inspired his career ambitions with the Office of Scholar Development. “Within days my advisor somehow made my story her own and helped me organize all my dreams and accomplishments in a way that made sense,” Sawyers said.

“Chris joins a community committed to leadership through action,” said Dan Futrell, CEO of the Pat Tillman Foundation and 2011 Tillman Scholar. “We look to the Tillman Scholar community to make a future impact greater than the exceptional service they’ve offered so far, and we’re honored to welcome Chris and support his leadership development.”

To date, the Pat Tillman Foundation has invested more than $20 million in scholar support and named nearly 700 Tillman Scholars at more than 100 academic institutions nationwide. For the full list of 2021 Tillman Scholars, along with their service branches, institutions and fields of study, visit http://scholars.ptf.org.

About the Pat Tillman Foundation:  In 2002, Pat Tillman proudly put his NFL career with the Arizona Cardinals on hold to serve his country. Family and friends established the Pat Tillman Foundation following Pat’s death in April 2004 while serving with the 75th Ranger Regiment in Afghanistan. The Pat Tillman Foundation unites and empowers remarkable military veterans and spouses as the next generation of public and private sector leaders committed to service beyond self. The fellowship program supports Tillman Scholars with academic scholarships, a national network, and professional development opportunities, so they are empowered to make an impact in the world.