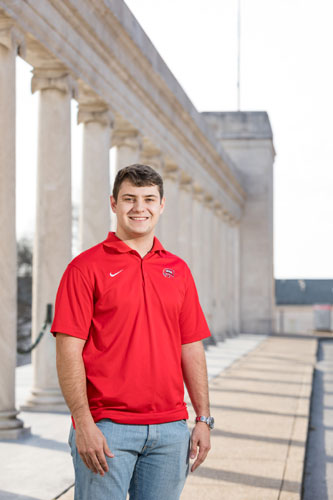 For Joey Dilliha, WKU is more than just a school. A senior marketing major and economics minor from Russellville, Dilliha has a long-time family history with WKU.

“My family has always gone here, and my mom has worked here for 34 years,” Dilliha stated. “It’s a big thing in our household. We love WKU. What really brought me here was the business college. I had heard from many people that the programs offered were outstanding, especially for the area that I wanted to go into, which was social media marketing.”

Prior to his arrival at WKU, Dilliha was already gaining valuable work experience.

“In early high school, I started running meme accounts on Instagram and Twitter,” Dilliha said. “I was able to gain a following of 5.2 million followers combined on those platforms.  From that, I was able to learn influencer advertising and start running ads for many digital e-commerce brands. Later in high school, I worked for a company called Flipmass, an influencer commerce platform based out of San Antonio that handles the relations between brands and influencers. That was great experience to gain at an early age.”

Following his enrollment at WKU in the Gordon Ford College of Business, Dilliha was inspired by the unique opportunities presented to him for professional development.

“In 2019, I was able to attend Career Track in Atlanta with Gordon Ford College of Business Internships Coordinator Monica Duvall, where we got to tour the Coca-Cola world headquarters along with a few other places,” Dilliha said. “Being able to do that really pushed me to want to better myself and make sure I’m on the right path to get a good job after college.”

Dilliha used this motivation to continue expanding his work experience while in college.

“I did a one-semester internship with an influencer company called Inked Brands here in town, which was an experience I really enjoyed,” Dilliha explained. “After I left Inked, I was able to intern with The Walt Disney Company on the Social Activation Team down in Orlando during the Spring of 2020. That entailed running the organic posts on the Walt Disney World account and Facebook ads for Walt Disney World, Disneyland and Disney Cruise Line accounts. For a 20-year-old to get to be on that team was such an amazing experience and a dream come true. The following summer, I was accepted to the FBI honors internship for cybersecurity, but it got cancelled due to COVID-19. I now have a role at Fruit of the Loom as part-time digital analyst which will move into a full-time position post-graduation. I definitely wouldn't be in the position I am today without the help of the business college.”

The knowledge that Dilliha has gained through his coursework continues to be a key factor in his success outside of the classroom.

“I was able to apply what I’ve learned in my social media marketing classes during my time at Disney,” Dilliha said. “I wouldn’t have had the basic skillset to complete those campaigns effectively if it wasn’t for the GFCB. I’ve also applied some of the data analytics material I’ve learned in class, specifically with my job at Fruit of the Loom right now. I wouldn't be able to navigate Excel or navigate the numbers without the training I’ve had at WKU.”

Dilliha has worked hard to make his dreams come true and obtain post-graduate employment, while continuing to strive toward the goals he has set for his future.

“Long term, I want to own my own social advertising agency,” Dilliha stated. “Whether that be an umbrella digital marketing agency or specifically for social management or social campaigns, my end goal is to work with clients on a day-to-day basis and help them achieve their goals in the digital aspect of their business.”

Though his time as a WKU student is coming to a close shortly, Dilliha recognizes how his time at WKU has impacted him in both personal and professional ways.

“Everywhere I go, I’m proud to say that I went to WKU,” Dilliha explained. “A lot of my colleagues at Disney were from bigger schools, so I loved being able to be a representation of WKU and the Gordon Ford College of Business in a professional setting.”

“It has been such a huge part of my upbringing,” Dilliha said. “I can’t think of a life outside of WKU and the Western spirit. I’m a WKU man through and through. The community and sense of family that I’ve built here has been very helpful. I definitely would not be in the position I am today if it weren’t for my friends that I’ve met here that support me every step of the way.”

For more information about a major in Marketing at WKU, visit: https://www.wku.edu/marketing/