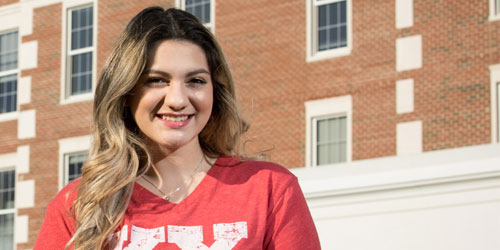 Born in Los Angeles, Calif. and coming to WKU from Westmoreland, Tn., Ramirez chose to attend WKU for its proximity to home and financial aid opportunities.

“I wanted to go somewhere far enough from home, but close enough that if something happened I could go home,” Ramirez explained. “WKU also offered the most scholarship financial aid opportunities, which was a big deal in my decision-making process.”

Ramirez is a student in the WKU Gordon Ford College of Business, majoring in Economics with a minor in Finance and certificate in Applied Data Analytics.

“I love my classes,” Ramirez said. “I think my professors have genuinely been the best professors I could have asked for.”

Through her coursework, Ramirez had the opportunity to seek out industry experience through internships. She currently works as a Store Operations Analyst Intern with Paper Source, a stationary and gift retailer.

“I found the internship through an activity my professor planned for class one day,” Ramirez said. “Everything I do in the internship revolves around data. There are so many things I feel like I wouldn’t have known without my Computer Information Systems, Economics, and Statistics classes. Being able to tell the difference in what the numbers mean and what everything represents was probably one of the biggest factors that played into why I got the job.”

Ramirez is also part of the first WKU Gordon Ford College of Business Living Learning Community (LLC), which is giving her a unique experience that merges academics with student life. The LLC, specifically created for first-year students, works to foster deeper connections between incoming freshmen and their peers, professors, and WKU staff.

“Joining the LLC allowed me to be in one of the most encouraging environments I’ve ever experienced,” she said. “I had a group of 25 peers around me that I had three classes a day with, and we all lived on the same floor too. We were instant friends, and we knew so much about each other quickly. They were my first friends on campus, and we didn’t have to go through that ‘I don’t know anyone in this class’ phase. It just made it feel like home.”

Ramirez believes that her involvement with the business LLC not only eased her transition to college, but prepared her for a successful academic career.

“The LLC was the biggest thing that contributed to my success within the GFCB itself, not only as a person, but also as a college student,” she explained. “I got to meet so many people, including department heads, the deans, and the office associates. I was able to put a face to a name and build a relationship with those people, and they were so willing to help. They care about you as a person. They care about your success. They ask how I’m doing.  It means so much more than just having a class with a professor.”

“We also met people from outside the college, like counselors, and people working in billings, financial aid, and Housing & Residence Life,” Ramirez continued. “That was great for the transition to college because I knew people and I was comfortable enough to go to them when I needed them.”

Ramirez’s involvement with the LLC was foundational in growing her involvements across campus. She currently serves as the president of a Panhellenic sorority and a GFCB ambassador.

“As a GFCB ambassador, I’m one of eighteen faces of the college,” Ramirez said. “We’re able to talk to prospective students about our experiences and why we love it here, and I think that matters a lot more than statistics or rankings.  As President of the Epsilon Zeta chapter of Sigma Kappa sorority, I represent Greek activities on campus.  Knowing that I represent something more than myself is a lot sometimes, but it prepares you for the real world. When you’re going to get a job, you’re going to represent that company and they’ll want you to represent it well.”

Following graduation, Ramirez is considering a career in analytics.

“I’ve considered becoming a data analyst, which is what I’m doing in my internship currently,” Ramirez stated. “I really love what I’m doing there. I’d also enjoy something creative that would allow me to travel. I hope to go places like New York, San Francisco or Los Angeles.”

With sights set on her future, Ramirez expressed gratitude for the foundation provided by her WKU experience.

“While I won’t be staying in Bowling Green, I’m so thankful that what I’ve learned here has prepared me for my future,” she said.