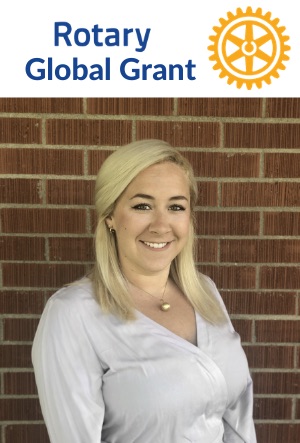 Hart, who is from Princeton and the daughter of Fred and Sally Hart, is a 2019 graduate in international affairs and Asian religions and cultures who minored in Spanish.

As a Rotary Global Scholar, Hart will enroll in the MA Conflict Resolution and Mediation program at Tel Aviv University. Hart plans to pursue employment with the federal government, such as the U.S. State Department’s Bureau for Conflict and Stabilization Operations, before moving into the nonprofit sector. She aims to address underlying issues of conflict in developing countries.

“Conflict resolution is more than just stopping war or conflict. It is ensuring justice for all,” Hart said. “Through this program I will learn and practice skills to identify and mitigate triggering aspects of conflict, offer support to marginalized and traumatized groups, and promote equality--priorities of Rotary.”

In addition to earning her master’s degree, Hart looks forward to working with the organization to pursue shared interests. “Rotary has always been an organization I admired, but I never realized how closely my passions aligned with Rotary’s goals until I began the process of applying for the Rotary Global Grant.”

Hart’s experiences on and beyond the Hill have prepared her for her career pathway. She was a member of the Mahurin Honors College and the Chinese Flagship Program. She was also actively involved in the Student Government Association, as well as university-wide budget and academic quality committees. Additionally, she was the president of the Hilltopper Organization of Latin American Students (HOLAS) and a member of Phi Mu Fraternity who also worked closely with the Center for Citizenship and Social Justice.

Hart studied Chinese, Spanish, and Arabic, languages spoken in areas that frequently experience conflict or have potential for future conflict. She studied in Nanjing, Shanghai and Beijing, China, including the prestigious Princeton in Beijing program and the Chinese Language Flagship Program Capstone. She also studied in Meknes, Morocco and Cali, Colombia, and she taught English at a primary school in Spain after graduating.

By working with the Office of Scholar Development, Hart earned selection for many nationally competitive opportunities: a Boren Award and a Freeman-ASIA Award, as well as a Critical Language Scholarship and a Gilman Scholarship. Hart also conducted undergraduate research with Dr. Timothy Rich in the Department of Political Science, which was published in the Taiwan Sentinel.

“I would like to thank Dr. Timothy Rich, Fabián Álvarez, and Sara Moody for their continuous mentorship and support,” said Hart, “along with Lindsey Houchin in OSD for her guidance throughout the application process.”

Hart sought guidance from Lindsey Houchin, coordinator of nationally competitive opportunities in the Office of Scholar Development, in preparing her Rotary Global Grant Scholarship application.  She was also named an alternate for a Fulbright U.S. Student Study/Research Award to Israel. Hart’s application for the Rotary Global Grant was sponsored by the Rotary Club of Princeton in District 6710.