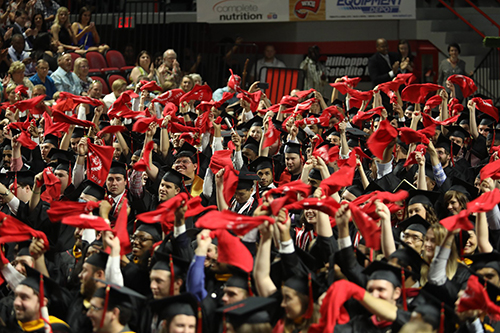 During the daylong special recognition ceremonies at Diddle Arena, WKU will confer degrees to 1,418 graduates – 11 doctoral, 255 master’s, 967 bachelor’s and 67 associate degrees and 79 undergraduate and 39 graduate certificates.

The schedule for Dec. 15 recognition ceremonies is as follows:

Ceremonies will include the ceremonial conferral of degrees, remarks from college deans, recognition of scholars and commissioning of WKU ROTC cadets. The graduates also will be individually recognized and shake hands with President Timothy C. Caboni. The fall graduates will be encouraged to participate in Topper Walk on as part of WKU’s 185th Commencement ceremony on May 10.

Emilie Gill, an art history and visual studies double major from Allensville, will be recognized as the Ogden Foundation Scholar during the Potter College of Arts & Letters ceremony. WKU’s top undergraduate academic award is presented to one graduating baccalaureate degree senior who has demonstrated exceptional academic achievement and outstanding university and civic engagement.

Other December ceremonies include:

For information about the December ceremonies, visit https://www.wku.edu/commencement/

WKU featured in 2021 edition of Guide to Green Colleges

For the 11th consecutive year, WKU has been recognized as one of the nation's most environmentally responsible colleges, according to The Princeton Review®.

“As a freshman, I decided I wanted to dive into the college experience,” Holt said. “During the H4 retreat, I asked the counselors how to be involved, and that’s where I first learned about the Spirit Master organization.”

Today we shared our last post commemorating Hispanic Heritage Month 2020. To wrap up our celebration of the month, we are sharing more information about the significance of HHM and the literary contributions of the Hispanic Community.