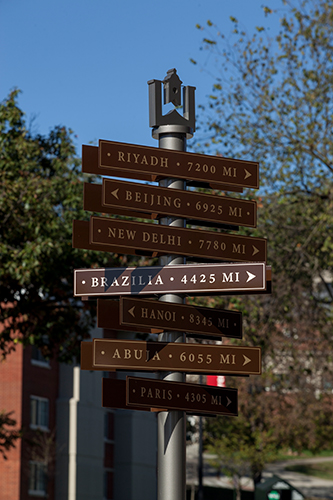 Three WKU students received Benjamin A. Gilman International Scholarships for fall and academic year study abroad.   Katie Daniels of Glasgow, Kate Hart of Princeton and Tristan Shaw of Louisville were selected as Gilman Scholars and will receive up to $8,000 to fund their study abroad programs.

Daniels, a senior English and religious cultures major, is the daughter of Susan and Scott Daniels.  She plays Celtic harp, Irish whistle, piano, and guitar and performs at the Glasgow Highland Games.  She will study abroad at the University of Saint Andrews in the United Kingdom during the fall 2018 semester. She plans to pursue a career teaching English as a second language.

Hart, a senior international affairs, Spanish and Asian religions and cultures major, is the daughter of Sally and Fred Hart. She has been actively involved in student government and university-wide budget and academic quality committees, as well as the Hilltopper Organization of Latin American Students and Phi Mu Fraternity. She plans to pursue a career in intelligence analysis in the federal government.

Shaw, a senior international affairs and Asian religions and cultures major, is the son of Beverly Reece and Kenneth Shaw. He has been an active member and officer of the Tennis and Badminton Clubs. He plans to pursue a career in the State or Defense departments working to implement multilateral, multicultural solutions to current and future policy conflicts.

Hart and Shaw are both students in the Chinese Flagship Program and will complete their Capstone Year in China where they will intern and study Mandarin Chinese intensively.  Hart and Shaw also received Boren Scholarships to fund their study abroad programs and Chinese language study.

“The Gilman Scholarship is a vital program that helps students with financial need study abroad,” Cory Dodds, coordinator of nationally competitive opportunities in the Office of Scholar Development, said. “Our students’ successes in this competition reflect WKU’s commitment to ensuring international experiences are open to all, regardless of financial background or major.”

Funded by the U.S. Department of State, more than 3,400 Gilman scholarships were awarded this academic year for undergraduate Pell Grant recipients to study or intern abroad.  Since 2001, the Gilman Scholarship has enabled more than 25,000 outstanding Americans of diverse backgrounds, including ethnic minorities, students studying science, technology, engineering and mathematic, and students with disabilities, to engage in a meaningful educational experience abroad. The program has successfully broadened U.S. participation in study abroad, while emphasizing countries and regions where fewer Americans traditionally study.