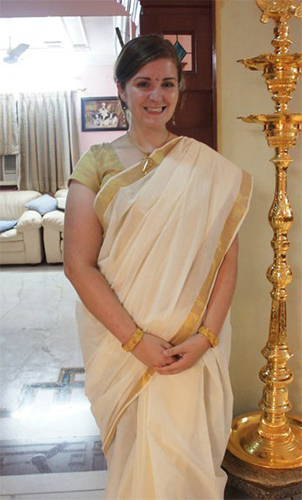 Sara Moody, a senior in the Honors College at WKU, has received a Foundation for Global Scholars award that funded a social work internship in India this summer and complemented her earlier international experiences.

The Foundation for Global Scholars is creating global scholars and leaders by offering assistance for students as they achieve their personal and professional goals through cultural and academic experiences around the world. Since the Foundation’s inception in 2007, more than $692,000 has been awarded to nearly 700 students who are furthering their education abroad and gaining practical experience.

Moody says that she was thrilled upon hearing the news about the scholarship.

“I had been so fortunate to receive the scholarship last year, I could not believe that I had been chosen once again for this exciting opportunity,” she said. “Since my own personal goals align so much with the Foundation’s mission, I decided to apply once more. I am so honored to continue representing the Foundation for Global Scholars and WKU as I embrace this new opportunity to study Social Justice in India.”

As a student at WKU, Moody is preparing for a career in international social work within the non-profit sector. She is pursuing degrees in Social Work and Asian Religions and Cultures with minors in American Humanics and Political Science. Moody is also an active member of the Chinese Language Flagship Program at WKU, program designed to help students achieve professional language proficiency.

Moody says that while planning this international experience and internship, she received incredible support from many WKU faculty and staff including those from the Department of Social Work, the Department of Philosophy and Religion, the Honors College, and the Office of Scholar Development.

“I would truly like to thank Dr. Jeffrey Samuels, Mrs. Jan Peeler and Mrs. Vivian Hunt for their dedication to personally mentoring and advising me in my global pursuits,” she said. “Additionally I would like to thank the Foundation for Global Scholars for the honor of receiving this opportunity to not only study issues of oppression and injustice in India, but also to have the chance to participate in empowerment, advocacy and education for these Indian communities.”

Jan Peeler, an instructor in the Department of Social Work at WKU, has worked with Moody both in the classroom and abroad.

“Sara has developed an enormous number of interests as a WKU student, one of which is a passion for international study. This passion has led to her participation in the Chinese Flagship Program,” she said. “Sara exemplifies the type of student that Western Kentucky University and the Department of Social Work supports in the mission to be a university with international reach.”

Dr. Jeffrey Samuels, associate professor of Philosophy and Religion, remarked on Moody’s educational prowess and spirit. “Sara Moody has been an excellent addition to the Asian Religions and Cultures major,” he said. “Her active participation in the classroom as well as her work in Asia has influenced the Asian studies program with a remarkable energy.”

Before returning to WKU to begin her final year as a Hilltopper, Moody completed her internship with the Madras Christian Council of Social Services in India planning advocacy and group therapy sessions for the Human Trafficking program in addition to taking an experiential course at the Foundation for Ecological Research Advocacy and Learning in India.

About the Honors College at WKU: WKU is home to the only Honors College in the Commonwealth of Kentucky. Created in 2007, the Honors College at WKU provides an intimate, highly selective learning environment where college-age gifted and high-achieving students can develop the skills to prepare them for success in the nation’s top academic and career opportunities. For information, call (270) 745-2081 or Eileen Ryan at eileen.ryan@wku.edu

About the Chinese Language Flagship Program at WKU: Sponsored by the National Security Education Program, Flagship seeks to bring students from the beginning level of Chinese proficiency to the Superior level during their undergraduate career. Students take Flagship courses every semester in addition to their major or minor coursework, working towards a level of professional proficiency in the language. For information, contact Melinda Edgerton, Coordinator, at (270) 745-5043 or melinda.edgerton@wku.edu