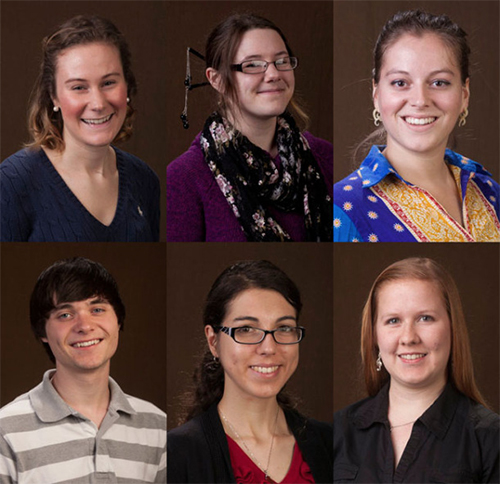 A record six students at WKU have been awarded U.S. Department of State Critical Language Scholarships.

Elizabeth R. Gribbins of Louisville; Kelli N. Hogue of Burlington; Bailey E. Mack of Louisville; Tyler Prochazka of Newton, Kan.; Sarah Schrader of Bowling Green and Kelly E. Tursic of Union will use the scholarships to study languages this summer in various locations. Joanna Chang of Owensboro, was selected as an alternate.

Gribbins, a French major, will study Arabic. The daughter of John Gribbins and Denee Walsh is a student in the WKU Honors College and spent four months in 2013 studying Arabic and Middle Eastern politics at Moulay Ismail University in Morocco.

“I plan to continue studying Arabic after the CLS program this summer and would like to use it in some form in my future career—whether that be translating, U.S. diplomacy or international development,” she said.

Hogue, an international affairs and Asian religions and cultures major, will study Chinese. The daughter of Beth Meuleman is a student in the WKU Honors College and the Chinese Flagship program and has been studying Chinese since she was a freshman in high school.

“It wasn’t until I was a senior and looking for potential colleges did I decide that I wanted to seriously pursue a career in which Chinese would be an essential part of my daily life,” she said. “I chose to come to WKU because of this decision, and because of the opportunities the Chinese Flagship could give to me.”

Mack, an international affairs and Spanish major, will study Chinese. The daughter of Tom and Catherine Mack is a student in the Honors College at WKU and the Chinese Flagship program. She said she became interested in the Flagship program in her desire to learn a third language.

In the past three years, Mack has studied Chinese at the National Taiwan University in Taipei, Taiwan, participated in a faculty led study abroad trip to Xi’an, China, and studied jungle conservation at Chontachaca Ecological Preserve in Peru.

Prochazka, an international affairs and Asian religions and cultures major, will study Chinese. The son of Doug Prochazka is a student in the Honors College at WKU and the Chinese Flagship program. He is a member of  WKU Forensics Team and editor of the Chinese Newspaper on campus, “which has helped me hone my own Chinese skills and expand my knowledge of China,” he said.

Prochazka studied Chinese at Beijing Normal University as a part of the Princeton in Beijing program in summer 2013, participating in Chinese classes and tutoring for five hours every day.

Schrader, a biology and chemistry major, will study Korean. The daughter of Steven and Michelle Schrader is a student in the WKU Honors College and Chinese Flagship Program. She spent six months in 2012 in South Korea teaching English through the Teach and Learn in Korea program and has made four trips to China through the Flagship Program.

Tursic, an international affairs and Asian religions and cultures major, will study Chinese. The daughter of Rich and Kathy Tursic is a student in the WKU Honors College and Chinese Flagship Program.

“I enjoy interacting with the international community and learning about other cultures,” Tursic said. “The Chinese Flagship Program is what attracted me to WKU because I grew up in China and was determined to continue studying Chinese in college.”

“I am very proud of the five Flagship students who received the prestigious CLS. I believe their CLS experiences will not only improve their language skills but also will enhance their cultural understanding,” Dr. Jianjun He, Academic Director of the Chinese Flagship program, said. “The experience is also important for them to grow into global citizens, which is the goal of the Flagship program.”

“Our students’ success demonstrates the enormous of WKU students when they’re connected with the opportunity and the support to demonstrate their excellence in national competition,” she said. “I am especially pleased to see a growing number of languages represented among our applicants and winners this year. Beyond students from our excellent Chinese Flagship and growing Arabic language program, WKU had strong applicants for Russian, Japanese, Persian, Turkish and Korean. The Department of Modern Languages and the increasing number of students studying abroad are clearly contributing to this diversity.”

David DiMeo, assistant professor of Arabic at WKU, said there has been a large increase in the number of CLS applicants for Arabic and an overwhelming interest on the part of the students.

“This is related to the growth of our new Arabic major and minor, the only such programs in the state,” he said. “As such, we are attracting some outstanding students from all over the state and outside.”

Dr. DiMeo said the competition was incredibly tough, “and so those who actually received the awards did so because they have demonstrated long-term commitment to learning strategic languages and cultures.  The CLS is the most sought after scholarship among our students because they recognize not only the great opportunity to study abroad, but the tremendous strategic value of key languages and the career opportunities, particularly in the government, that these languages can bring.”

Because the CLS is sponsored by the State Department and specifically targets a very small number of strategic languages and specially chosen overseas locations, Dr. DiMeo said students know that it is a great opportunity to explore the languages and areas the government places the highest value on.

“I was impressed with all the applicants’ strong and clear vision to use the language training to enhance their current major studies and to apply that to future service,” he said. “They have all truly internalized the importance of the international component of their studies and service.”