7 students, most in WKU's history, honored by Fulbright Program 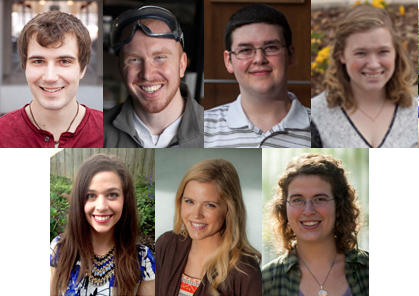 Seven WKU students have been honored by the Fulbright U.S. Student Program, the most in WKU’s history.

“The Fulbright may be the most recognized and competitive scholarship in American higher education,” WKU President Gary Ransdell said. “To have five student winners and two more alternates is an incredible tribute to our faculty mentors, our staff of the Office of Scholar Development, the Honors College and, more importantly, to the world class students who won. They will now spread out across the globe and use their Fulbright awards to further their academic dreams and impact people across the Earth.”

Chad Coomer, a biology and chemistry major and student in the Honors College at WKU, received a U.S. Student Fulbright grant to the UK to study for a master’s degree in infection and immunity at University College London. He has also been accepted into the National Institutes of Health Oxford-Cambridge Scholars Program, which will allow him to pursue a doctorate in virology at the University of Oxford while conducting HIV research at Oxford and the NIH.

Coomer, the son of Don and Evell Coomer, is a spring 2014 graduate. He has been engaged in virology research since his freshman year at WKU, participating in the Howard Hughes Medical Institute-sponsored Genome Discovery and Exploration Program where he isolated and characterized a novel bacterial virus and analyzed the genomes of two novel viruses. He has conducted research with Dr. Rodney King, Professor of Biology.

Jon Hendrie, son of David and Lynne Hendrie, is a spring 2014 graduate in biochemistry. He will use a Fulbright Research Grant to enroll in intensive German language courses for two months beginning in August and then conduct research in Heidelberg for 10 months.

A student in the Honors College at WKU, he was also awarded a DAAD (German Academic Exchange Service) Study Grant from the German Research Foundation for the same research. He has conducted research with Dr. Kevin Williams, Associate Professor of Chemistry.

Hendrie will build on research he started while participating in the DAAD Research Internship in Science and Engineering (RISE) Program. During the summer of 2013, he collaborated with a computer scientist from Karlsruhe Institute of Technology to develop training software and recruited expert laparoscopic surgeons to complete full operations on the Heidelberg Laparoscopic Intervention Operating Simulator (HELIOS) phantom body. The simulator records the surgeon’s movements that can be used to establish parameters such as economy of movement and efficiency.

Wesley Bromm, a spring 2013 graduate, received an English Teaching Assistantship to Vietnam. The son of Tim and Sonja Bromm majored in history and social studies.

Bromm said he applied for the assistantship because of the passion for cross-cultural experiences he developed while studying and working at WKU. In 2012, he studied at Kansai Gaidai in Hirakata, Japan, and traveled to Thailand. “It was a wonderful experience that escalated my love for being abroad,” he said. After building friendships with Vietnamese students on campus while working in the library, he realized that teaching English in Vietnam was what he wanted to do with his life.

She has completed a faculty-led study in the Czech Republic, a volunteer abroad experience in Tanzania and a public diplomacy internship at the U.S. Mission to the European Union in Belgium.

Angelika Masero, daughter of Areti Baldwin, is a 2010 graduate of WKU and the Honors College at WKU with degrees in journalism and German. She currently serves as the College and Career Readiness Counselor for Iroquois High School in Jefferson County and received an English Teaching Assistantship to Germany. “I look forward to learning more about German teaching methods, comparing them with American methods, and increasing my German linguistic and cultural proficiency,” she said.

Amy Correll, daughter of Charles and Elizabeth Correll, is a spring 2014 graduate of WKU with a self-designed degree in gerontology studies. An Honors College at WKU student, she is an alternate for an English Teaching Assistantship in Malta. Her study abroad experience includes 16 countries throughout Europe, Australia, Central America and Sub-Saharan Africa.

Clarice Esch, the daughter of Joe and Carol Esch, is a 2011 Gatton Academy graduate and spring 2014 WKU graduate in agriculture. She is also in the Honors College at WKU. She is an alternate for a Research/Study grant to Costa Rica. Her study abroad experience includes three trips to Costa Rica, two to Ecuador and one each to Greece and Nova Scotia. She has conducted research with Dr. Martin Stone, Associate Professor of Horticulture.