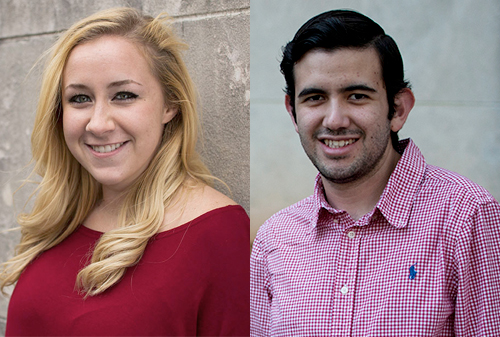 Two WKU students will study abroad this summer with support from the Freeman-ASIA (Freeman Awards for Study in Asia) scholarship program.

Mary “Kate” Hart of Princeton and Salvador Hernandez of Nashville, Tennessee, were awarded scholarships of up to $3,000 to advance their Chinese language studies abroad. Both are members of the Chinese Flagship Program, an initiative of the National Security Education Program within the Defense Language and National Security Education Office. The program seeks to bring students, who often begin with no knowledge of the language, to Superior level proficiency (on the ACTFL scale) in Chinese by the end of their undergraduate careers.

Hart, a second-year International Affairs, Spanish and Asian Religions & Cultures major, is the daughter of Sally and Fred Hart. This summer, she will participate in an intensive Chinese language immersion program through Princeton University in Beijing, China, for two months. Her plans after graduation include the Peace Corps before attending graduate school, eventually working for the Department of State in the Bureau of East Asian and Pacific Affairs.

Hernandez, a third-year International Business major, is the son of Susana and Salvador Hernandez. He will be studying at the National Taiwan University for nine weeks this summer in the International Chinese Language Program (ICLP). After completing his studies at WKU, he plans to participate in the Chinese Language Flagship Program’s Capstone year in China, gaining experience in the workforce. Ultimately he aims to pursue an MBA and start his own non-profit.

“Ms. Hart and Mr. Hernandez are not only committed to advancing their Chinese proficiency on campus but also devoted to developing themselves to be nationally competitive scholars. The Freeman-ASIA award is a great honor that acknowledges both their efforts and achievements,” said Dr. Ching-Hsuan Wu, Academic Director of the Chinese Flagship Program. “On behalf of the Chinese Flagship Program, I would like to extend our appreciation to Office of Scholar Development. The OSD staff members are resourceful, helpful, efficient, and caring. They have assisted our scholars to find the means to accomplish what they are capable of and deserve to achieve.”

Cheryl Kirby-Stokes, Coordinator of Nationally Competitive Opportunities for the Office of Scholar Development, said: “For these students studying abroad in a language acquisition program adds experience employers want: a demonstration of flexibility and a willingness to learn about and engage in a diverse environment. They are making a conscious effort to prepare themselves for a globalized workplace through study abroad.”

Freeman-ASIA is designed to support U.S.-based undergraduates with demonstrated financial need who are planning to study overseas in East or Southeast Asia. The program’s goal is to increase the number of U.S. citizens and permanent residents with first-hand exposure to and understanding of Asia and its peoples and cultures. Award recipients are required to share their experiences with their home campuses or communities to encourage study abroad by others and fulfill the program’s goal of increasing understanding of Asia in the United States. From 2001 through the 2013 academic year, Freeman-ASIA supported 4,500 U.S. undergraduates from more than 600 institutions with their study abroad plans in East and Southeast Asia.

Each of the students worked with the Office of Scholar Development at WKU in preparing their Freeman-ASIA scholarship applications and received support from the Office of Study Abroad and Global Learning.

About the Chinese Flagship Program: An initiative of the National Security Education Program, the Chinese Flagship Program at WKU is actively redefining the paradigm in language education. The program is designed to bring talented undergraduates who often start with no knowledge of Chinese up to the Superior level (ACTFL scale) of proficiency by the time they graduate by integrating Chinese language instruction at every stage of the undergraduate educational path, culminating in a capstone year abroad.