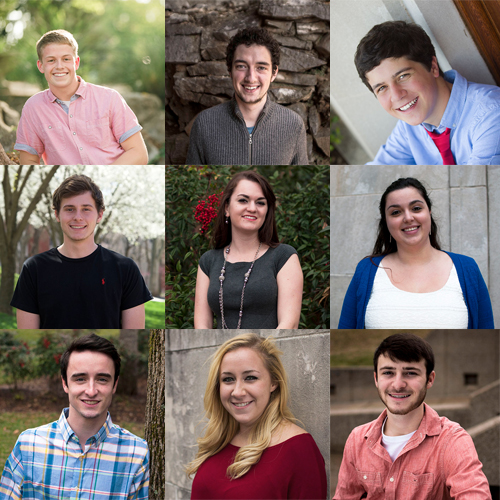 Nine WKU students have been recognized by the U.S. Department of State’s Critical Language Scholarship Program.

Five students will receive scholarships to study in intensive language programs abroad while four others were named alternates.

Alternates include Sidney Ehrenborg of Fisherville; Dalton Harshbarger of Burlington; Mary Kate Hart of Princeton; and Logan Johnson of Russellville.

Anderson, a first-year Economics, International Affairs and Asian Religions and Cultures major, is the son of Kim and Heath Anderson. He is a student in the Honors College at WKU and the Chinese Flagship Program and will study Mandarin in Changchun, China.

A member of the WKU Forensics Team and a senator in the Student Government Association, Anderson wants to work in the foreign service as a public diplomacy officer and help shape U.S. foreign policy in Asia.

Dahmer, a third-year Political Science and International Business major, is the son of Ann Coffey and Steve Dahmer. He is a student in the Honors College and Chinese Flagship Program and will study Chinese in Dalian, China.

Dahmer is a co-founder and President of WKU’s chapter of College Youth in Government and a student senator in the Student Government Association. He has previously studied and interned in Ecuador, Iceland and Taiwan, but this will be his first trip to mainland China. He is pursuing a combination of interests in economic development, civic engagement and public service.

Read, a third-year Economics, International Affairs and Asian Religions and Cultures major, is the son of David and Denise Read. He is a student in the Honors College and the Chinese Flagship Program. He has chosen to decline the Critical Language Scholarship to participate in a different intensive language program in Beijing.

Read is a member of the Chinese Culture Club and Golden Key Honor Society. After his Flagship Capstone year in China, he plans to apply for graduate school at Stanford University or a Fulbright grant to study in China.

Shaw, a second-year International Affairs and Asian Religions and Cultures major, is the son of Beverly Reece and Kenneth Shaw. He is a student in the Honors College and Chinese Flagship Program and is vice president of both Club Tennis and Club Badminton. He will study Chinese at Xi’an, China, and plans to pursue a career working with American and Chinese companies to strengthen intellectual property rights in China.

Todd, a third-year Anthropology and Arabic major, is the daughter of Rebecca and Joey Todd and a student in the Honors College. She will study Arabic in Madaba, Jordan, at the Jordan Language Academy, which will be her second trip to Jordan.

Todd is a member of the WKU Anthropology Club and Phi Sigma Pi Honors Fraternity and volunteer in refugee services at Community Action of Southern Kentucky. She plans to earn an advanced degree in development anthropology and work with refugees from Iraq and Syria.

“Beginning with no background in the language, she will complete an Arabic major in two years, thanks to her drive and focus,” Dr. DiMeo said. “She spent all of last summer in an immersion program in Jordan and achieved impressive results, which were instrumental in her selection for this honor.  She has a clear vision of applying her language skills to help refugees in the Middle East and in the U.S. and that commitment gives her exceptional drive.  Mollie is an outstanding representative of WKU’s International Reach and will have a tremendous impact in improving the lives of people in great need.”

Ehrenborg, a fourth-year International Business major, is a student in the Honors College and Chinese Flagship Program. She studied in Zhuhai, China, in 2013 through the State Department’s National Security Language Initiative for Youth program and plans to work for either an international business consulting group or an international imports/exports company.

Harshbarger, a second-year International Business and Spanish major, is the son of Dave and Lauri Harshbarger and a student in the Honors College and Chinese Flagship Program. He recently spent three weeks in Taiwan studying Chinese and politics. After graduation, he plans a career using Mandarin in U.S. business-related area.

Hart, a second-year International Affairs, Spanish and Asian Religions and Cultures major, is the daughter of Fred and Sally Hart and a student in the Honors College and Chinese Flagship Program. After graduation, she hopes to work for the Peace Corps before attending graduate school.

Johnson, a second-year International Affairs major, is the son of Rob and Julie Johnson and a student in the Honors College and Chinese Flagship Program. After graduation, he intends to pursue a career in community development abroad.

Ching-Hsuan Wu, Academic Director of the Chinese Flagship Program and an Assistant Professor in the Honors College, said the Critical Language Scholarship “is an honor that recognizes our scholars’ continued efforts in advancing their Chinese proficiency and their potential to successfully apply the language skills to their graduate studies and careers. We are extremely pleased to have 8 of our Flagship scholars recognized by the Critical Language Scholarship Program. The award is a testament to the countless hours of hard work put in both inside and outside of the classroom. We are confident that their passion for Chinese language will continue to serve them well. ”

Melinda Grimsley-Smith, Coordinator of International Scholarships for the Office of Scholar Development, said the CLS Program “offers an incredible, unmissable opportunity for students studying underrepresented languages. It’s aimed at undergraduate and graduate students in any academic discipline—as long as applicants are focused on studying and using the language long-term, they can be compelling candidates.”

The Critical Language Scholarship Program is a fully-funded overseas language and cultural immersion program sponsored by the State Department. With the goal of broadening the base of Americans studying and mastering critical languages and building relationships between the people of the United States and other countries, CLS provides study opportunities to a diverse range of university students from across the United States at every level of language learning.

About the Office of Scholar Development: The Office of Scholar Development is committed to helping students on all WKU campuses and in all majors and degree programs develop the vision, experience and skills to be independent, engaged scholars. OSD welcomes the opportunity to work with students interested in the Critical Language Scholarship program or other similar opportunities. Contact: (270) 745-5043.