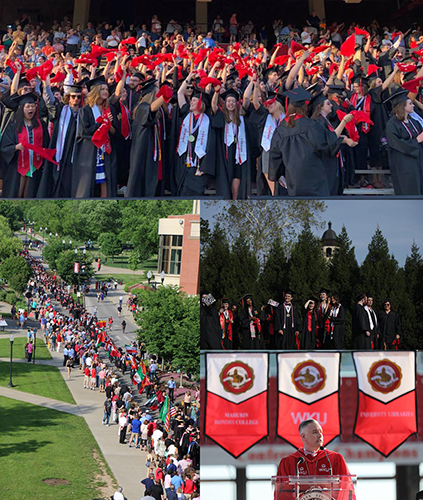 The red towels waved and graduates, their friends and family members cheered as the Class of 2018 celebrated Friday night at WKU’s 183rd Commencement.

WKU’s first outdoor Commencement ceremony since May 2006 began with a new tradition, the Topper Walk, as faculty and graduates made their way from the Kentucky Museum to Houchens Industries-L.T. Smith Stadium. English Professor Walker Rutledge, a faculty member for 49 years, served as chief marshal of the procession that included the parade of U.S. and international flags. (More: Commencement photo gallery.)

“Tonight you are part of something old and something new as we bring back an old tradition and begin a new one of our own,” President Timothy C. Caboni told the graduates. “Many of you will recall your first week as Hilltoppers when you assembled as a class during MASTER Plan Convocation, and we’re excited to bring you together one final time to celebrate your successful completion.

“For something new, I hope you enjoyed the Topper Walk. You are now the first class to take that walk down the Hill and through the faculty gauntlet.”

“Graduates, as you sit here tonight, having reached this important milestone in your life, I want you to reflect back to the first time you climbed the Hill as a member of the Class of 2018,” President Caboni said. “Think about the journey you have taken since then and what has been most special to you: lifelong friendships; your time in the classroom or in the library or in the Downing Student Union.

“Perhaps you’re feeling appreciative of the professor who took an interest in you, or you’re recalling the experience you had in a student club or as part of a team. Maybe you’re thinking about your study abroad opportunity, or an internship, or a project that had great meaning to you.

“No matter the specific thoughts that come to mind, your WKU Experience is special, and it is unique to you. It has shaped who you are, what you will do, and where you will go.”

The ceremony ended with another first, the Big Red Bash, as graduates continued the celebration with family and friends on the WKU South Lawn.

Nicole Musgrave of Columbus, Ohio, who received a Master of Arts in Folk Studies, was recognized as the John D. Minton Award recipient. The Graduate School’s top award is named for Dr. John D. Minton, who was a history professor and WKU’s first graduate dean and served as vice president for Administrative Affairs and as WKU’s fifth president.

Lily Nellans of Des Moines, Iowa, who received her bachelor’s degree with double major in International Conflict Studies and Philosophy with a minor in Citizenship and Social Justice, was recognized as the Ogden Foundation Scholar, WKU’s top undergraduate graduation honor. The Ogden Foundation Award is presented to one graduating baccalaureate degree senior who has demonstrated exceptional academic achievement and outstanding university and civic engagement.

Nellans has been a member of the WKU Forensics Team and Student Government Association and served as a member and volunteer for other campus and community organizations. Nellans traveled abroad four times to Bosnia and Herzegovina, Israel and Kosovo as she developed her passion for genocide prevention. She will begin a master’s program this fall at the London School of Economics and Political Science.

The award was presented by David Hartman, a member of the Ogden Foundation Board of Trustees.

On Saturday, WKU’s six academic colleges will host special recognition ceremonies at Diddle Arena to celebrate the accomplishments of their graduates who will walk the line and shake hands with President Caboni. The schedule is as follows: College of Health and Human Services at 8 a.m.; University College at 10 a.m.; Ogden College of Science and Engineering at noon; College of Education and Behavioral Sciences at 2 p.m.; Potter College of Arts & Letters at 4 p.m.; and Gordon Ford College of Business at 6 p.m. (More: Commencement website; parking map; parking video)

The ceremonies will be broadcast live by WKU PBS and webcast live on WKU YouTube Channel at https://www.youtube.com/wkunews and on the WKU Facebook page at https://www.facebook.com/WKUNews/

In addition to the WKU ceremonies, The Gatton Academy of Mathematics and Science in Kentucky will recognize 88 students from 48 counties in the Class of 2018, its 11th graduating class. The ceremony will begin at 10 a.m. Saturday (May 12) at Van Meter Hall. Guest speaker will be Hood Harris, President of the AT&T Kentucky.

On Monday (May 14), WKU regional campuses in Elizabethtown-Fort Knox and Owensboro will recognize their graduates.

The WKU Owensboro Ceremony will begin at 6:30 p.m. at the RiverPark Center, 101 Daviess St., Owensboro. The keynote speaker will be Madison Silvert, president of The Malcolm Bryant Corporation. Provost David Lee and student Cindy Williams also will make remarks.