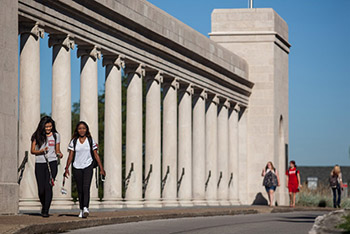 WKU is preparing for two major events on Aug. 21 -- the opening of the fall 2017 semester and the Great American Eclipse.

To accommodate visitors to campus for the total solar eclipse, WKU has delayed the start of classes on all campuses until 4 p.m. Aug. 21. Offices at all WKU campuses will observe regular hours that day.

The path of totality will stretch across the United States from Oregon to South Carolina in a roughly 100-mile wide band. In Bowling Green, totality starts at 1:27:23 p.m. and ends at 1:28:39 p.m.

Eclipse viewing events for K-12 students, community members and WKU students, faculty and staff are planned at Houchens Industries-L.T. Smith Stadium, WKU South Lawn and WKU Farm.  A VIP event will be held from noon to 1:30 p.m. at the stadium’s Jack and Jackie Harbaugh Club.

As part of its 10th anniversary celebration, The Gatton Academy of Mathematics and Science in Kentucky will host alumni, current students, families and friends for a Solar Eclipse Festival from 10:30 a.m. to 2:30 p.m. at South Union Shaker Village.

For more about the eclipse and events at WKU and the region, visit http://www.wku.edu/eclipse/

Here is a list of other events as WKU prepares for the fall semester:

The Intercultural Student Engagement Center will host the ISEC Academy Aug. 11-13. The program assists first-year students who identify as students of color (Black, Hispanic/Latin, Asian, Native American, Multiracial) and/or who are first-generation, Pell eligible, and have some academic need with their transition, persistence and graduation from WKU. ISEC Academy includes peer mentoring and a living learning community in Keen Hall.

Orientation weekend events at Downing Student Union include a welcome and opening session, family and student orientation sessions, kickoff dinner, personal development sessions and social activities. The ISEC Academy will conclude with a luncheon Aug. 13 at the Mahurin Honors College.

Since M.A.S.T.E.R. Plan’s first year in 1993, more than 43,000 students have participated in the program designed to help first-year students make a successful transition to WKU. A Birthday Bash to celebrate the program’s 25th anniversary will be held at 8 p.m. Aug. 16 at the Preston Health and Activities Center.

President will welcome students, other groups to WKU

International Student Orientation Week activities will be held Aug. 14-18 with a Welcome Back Picnic for international students from 4 p.m. to 7 p.m. Aug. 20 at Kereiakes Park.

The following events are planned at WKU’s Regional Campuses:

Residence halls open for all non-M.A.S.T.E.R. Plan participants at 8 a.m. Aug. 17. Residents are encouraged to move in by Aug. 20 to avoid traffic/congestion during the solar eclipse on Aug. 21. More: Residence hall move-in guide.

The WKU Graduate School will host graduate student orientation program at 8:30 a.m. Aug. 17 at Jody Richards Hall Auditorium followed by a welcome reception for graduate students from 7 p.m. to 10 p.m. at the Augenstein Alumni Center.

The President’s Opening Convocation for faculty and staff will be held Aug. 18 at Van Meter Hall. Entertainment by Mt. Victor Revue will begin at 8 a.m.

Gathering on the Hill Aug. 18

Following the convocation, WKU Regional Campuses will host a meet and greet at WKU’s Faculty House. Remarks will begin at 10:15 a.m.

In addition to the Solar Eclipse Festival, The Gatton Academy will celebrate its 10-year anniversary Aug. 19-21 with several events including alumni classes; a presentation by Dr. Tim Gott, The Gatton Academy’s first director; a welcome reception; class reunion dinner; alumni service project; and an alumni prom.

On Aug. 26, WKU's Office of Admissions will host Head for The Hill, an open house event for prospective students that offers a comprehensive look at WKU’s academic offerings, student activities and campus. Sessions are offered to provide information about life on The Hill, and an information expo allows students and their families the opportunity to personally connect with representatives from different academic departments, student services, housing, financial aid and more. Register at http://www.wku.edu/headforthehill.

The annual event, hosted by the Bowling Green Area Chamber of Commerce, will be held from 11 a.m. to 3 p.m. Aug. 30 on the WKU South Lawn.

International Year of Bosnia and Herzegovina

WKU will celebrate its International Year of Bosnia and Herzegovina during the 2017-18 academic year. Featured events include Bosnian Café, 10 a.m. to 1 p.m. Aug. 28 at Centennial Mall; Bosnia 101 on Aug. 29; A Culture Carried: Bosnians in Bowling Green, an exhibit featuring stories from Bowling Green’s Bosnian community, Sept. 29-June 30 at the Kentucky Museum. Visit the IYO featured events calendar for the latest information about activities and programming.

Many offices and departments at WKU are using social media to connect with students, faculty, staff, alumni and community members. Learn more at WKU’s Social Media directory at http://www.wku.edu/social/

Western Kentucky University tied with one other public, four-year institution for the highest score in the state on the Kentucky Council on Postsecondary Education’s (CPE) annual diversity, equity, and inclusion (DEI) report.