This is a swipeable event.

Contact Tony Harkins at Anthony.harkins@wku.edu for more information or copies of the event poster.

Dr. Burgos will also talk on the subject “Scouting the Americas for Giants: Alex Pompez and the Work of Integration” at 4:00 pm April 9 in Cherry Hall 227. 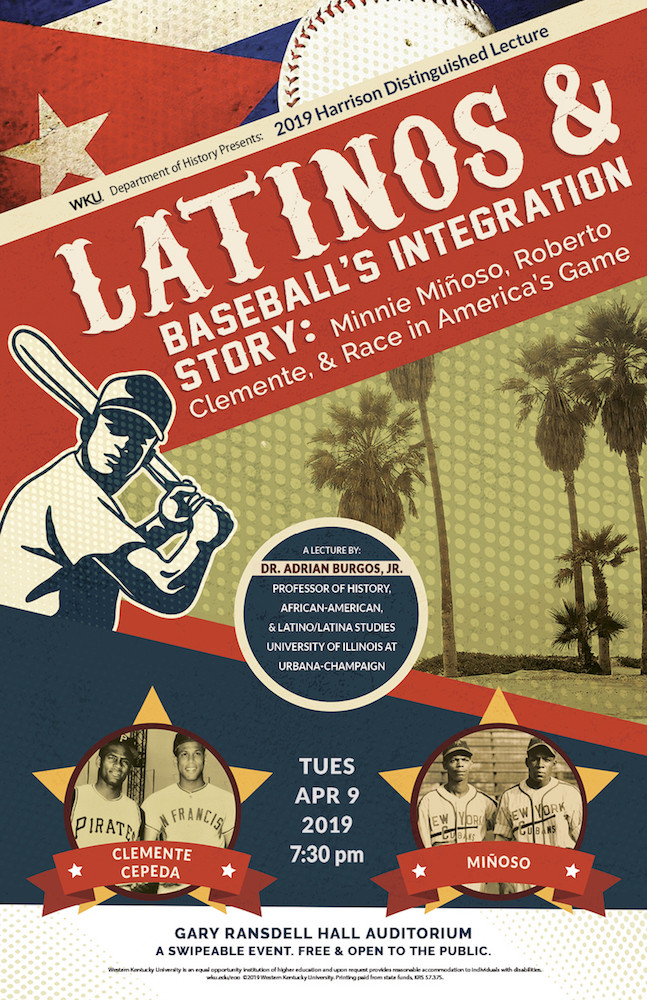 Adrian Burgos, Jr. is a historian who specializes in U.S. Latino history, sport history, urban history, and African American history. His teaching, research, and public engagement focus on the migration and immigration experiences of Caribbean Latinos within the United States as they illuminate processes of racialization, identity formation, urbanization, and labor. In particular he examines how Latinos have become part of U.S. society while simultaneously engaging in transnational practices to retain their cultural identities. His books include Playing America’s Game: Baseball, Latinos, and the Color Line (2007), Cuban Star: How One Negro League Owner Changed the Face of Baseball (2011), and he is coeditor, with Frank Guridy and Gina Pérez, of the anthology Beyond El Barrio: Everyday Life in Latina/o America (2010).

Burgos has also served as an academic adviser on museum exhibits such as the National Baseball Hall of Fame's Viva Baseball! and documentaries such as Roberto Clemente (2008), The Tenth Inning (2010), and Cuba: Island of Baseball (2016). Since 2017 he has been the editor-in-chief of La Vida Baseball, a digital platform on Latinos in baseball in partnership with the Baseball Hall of Fame.