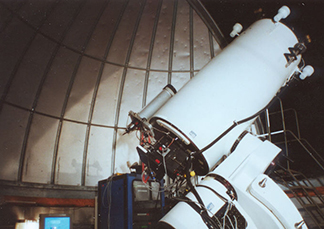 WKU has received a grant from the National Science Foundation to replace the telescope and control system at the Bell Observatory.

“This project will expand our capabilities in both engaged student scholarly activity and undergraduate astronomy education,” said Dr. Michael Carini, Principal Investigator on the grant and Chair of WKU’s Department of Physics and Astronomy and Director of the Bell Observatory. “It will enable WKU and other Kentucky colleges and universities to increase the involvement of undergraduate students in hands-on research projects.”

The new 28-inch telescope will replace the 24-inch telescope at the Bell Observatory, which is located 12 miles southwest of Bowling Green on the Warren/Logan county line.

“The new instrument will be used by students and faculty from WKU and across Kentucky to study supermassive black holes at the centers of distant galaxies; deepen our understanding of the structure of our own Milky Way Galaxy; study specific classes of binary star systems that provide direct measurements of star masses and sizes; and determine if stars that may host extrasolar planets actually do or are instead two stars closely orbiting each other,” Dr. Carini said.

WKU’s legacy of operating a research grade astronomical facility has its origins in the mid-1970s when the current telescope and dome were purchased. The observatory, located on land donated by Charles R. Bell, opened in 1987 and the telescope was installed. WKU received a grant from NASA in 1999 to upgrade the observatory with new instrumentation and control systems to allow remote operation of the telescope and the dome.

“As the system aged, the need for a replacement became critical,” Dr. Carini said. “At the same time, the need for access to a local facility for students pursuing astronomical research at all Kentucky schools of higher education became apparent.”

In late 2020, he said, WKU faculty and staff put together a collaboration of astronomers at institutions across Kentucky and the region (University of Kentucky, Northern Kentucky University, Morehead State University, Thomas More University, Austin Peay State University and Shawnee State University) and submitted a proposal to the National Science Foundation’s Major Research Instrumentation program to replace the current telescope with a modern, larger telescope.

“The instrument will also be used to enhance the undergraduate astronomy curriculum at WKU and other Kentucky colleges and universities,” Dr. Carini said. “The team will use resources that are available to us as a result of our participation in the NSF funded Kentucky-West Virginia Louis Stokes Alliance for Minority Participation (KY-WV LSAMP) to increase the recruitment and retention of African American students at WKU.”

The proposal also provides funding to complete the construction and installation of a small radio telescope being built via a collaboration of faculty and students from the Department of Physics and Astronomy and the School of Engineering and Applied Sciences.