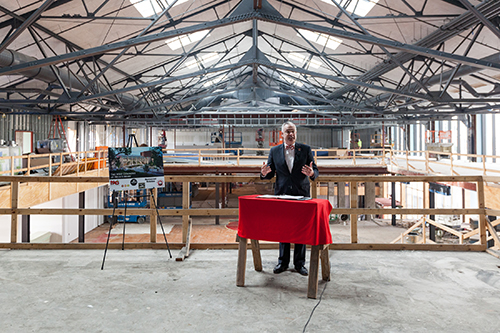 When the WKU Commons at Helm Library opens this fall, it will be a major focus for the top of the Hill, blending collaborative meeting and study space with food and beverage.

On Tuesday, President Timothy C. Caboni announced the food venues that will occupy the latest iteration of the 86-year-old former gymnasium and former library.

“We have designed this common, learning space to be warm, inviting and comfortable - where students feel at home and where they feel at ease to study, to collaborate, to converse, and let’s not forget – to dine,” President Caboni said. “So, as we reimagined and reformulated this space, at the center of every discussion was something near and dear to our Hilltoppers and to the entire WKU community – FOOD!”

The venues include Panda Express; Moe’s Southwest; Rising Roll; and the locally-owned Spencer’s Coffee and Lost River Pizza Company. There will also be a space where venues will rotate every few weeks. This fall, those will include Tavolino – Fresh Italian Fare; Ever Grains – Food for Wellness; and Barbecue District – Fire It Up.

Space will also be provided for pop-ups—shops that may stay for a few weeks to give the WKU community a taste of what they offer in brick-and-mortar restaurants. Featuring local fare on campus is important because it makes up so much of the Bowling Green food scene and many local restaurants are founded by WKU alumni and students, President Caboni said.

Twenty-four individuals have been selected for the upcoming WKU Staff Leadership Institute (SLI) and met for the first time on September 28.