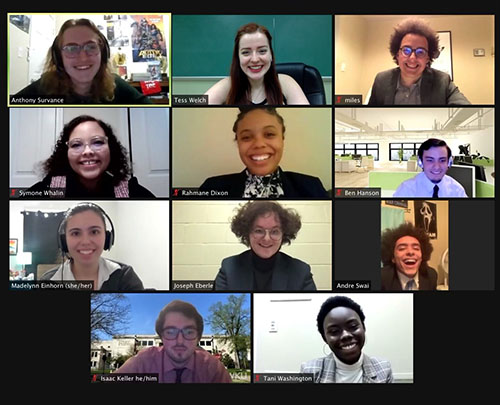 In the 13 speech categories, WKU students captured 12 state titles. Sophomore Jo Headrick was recognized as the tournament’s top competitor in speech for her success across four different events.

In recognition of these collective efforts, WKU topped the Large School Sweepstakes category in Individual Events and Debate and ultimately was crowned the Kentucky Forensics Association Grand Champion for the 29th consecutive year.

WKU Director of Forensics Ganer Newman was proud of the team’s results. “Our students put in a lot of effort preparing for the state tournament, including learning new events we do not regularly compete in during the season. These challenges are all compounded by the virtual competitive environment this season,” he said.

Despite the state title, the season is far from over. “We are pleased with our state championship, but we remain focused on achieving all of our team goals. Last year, we did not get the opportunity to defend our 2019 AFA National Championship or reclaim the NFA National Championship title but that is our goal this season. We have a lot of work to do to put the team in the best position possible to make it happen,” Newman said.

The team will compete this weekend at a virtual tournament hosted by McKendree University.

Results from the Kentucky Forensics Association State Tournament are as follows: