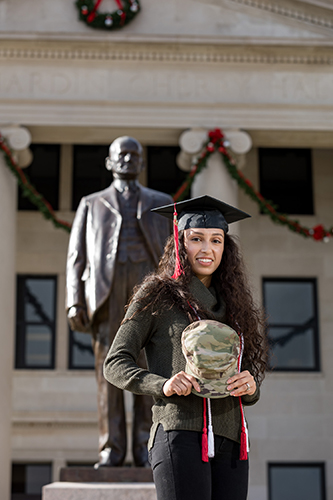 Lopez credits her accomplishments to her armor-like self-confidence and resilience, which continues to propel her forward despite hardships such as childhood abuse, familial estrangement, and financial insecurity. “I want my children to have a good life. I don’t ever want them to endure or fathom what I have been through,” Lopez said. “This mindset and my ability to let my past empower me rather than define me are the personal strengths that led me to pursue the Army ROTC program and the nursing program.”

Lopez plans to be a bedside Army nurse for at least five years to gain the basic skills needed to excel as a practicing Army medical professional. Long term, Lopez aspires to work as an Emergency Psychiatry - Mental Health Nurse Practitioner, and she also dreams of opening a free clinic in a third world country.

“I want to care for others and to bring people some aspect of positivity,” Lopez said. “Both programs [ROTC and Nursing] are also not learned once, rather they are continuously evolving and taught throughout our career to make us better individuals.”

Lopez’s path to WKU was linear – all it took was a walk on campus for her to feel like a Hilltopper. “I know you’re not supposed to choose a college based off its appearance, but at that moment we [Lopez and her fiancé] fell in love,” she said. “As soon as you walk on the campus you can feel the spirit, and that is the primary reason I chose to attend here.”

In addition to the scholarship distinctions, Lopez accepted many honors throughout her time at WKU. These awards included an invitation from the Sigma Nursing Honor Society as well as being recognized as an Outstanding Student of the Week within the WKU Nursing program. Lopez made the Dean’s List and President’s List each semester for achieving a high grade point average.

After graduation, Lopez will continue to reminisce on fun WKU memories, such as training with her ROTC family, studying in the library with friends, and attending WKU football and basketball games. In her free time, Lopez competes in 5K races, participates in competitive bowling, practices veganism, and is in the midst of developing her own poetry book. She also enjoys hanging out with her fiancé and their pets - two Siberian Huskies and one bearded dragon, respectively.