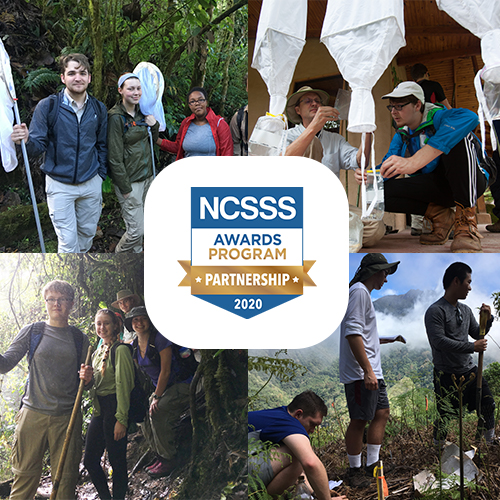 The Innovative Partnership award was announced at the National Consortium of Secondary STEM Schools (NCSSS) Professional Conference on Friday, November 6. The NCSSS includes member high schools, many ranked as the best in the country, along with affiliate college, university, summer program, foundation, and corporate members, that share the goals of transforming mathematics, science, and technology education.

The Gatton Academy and Cloudbridge partnership was recognized out of a competitive pool of programs. According to the NCSSS, this is the third year of the award program, and each year the applicant pool has doubled.

The Gatton Academy started its partnership with Cloudbridge in 2010. A biodiversity field research study abroad course was developed to directly involve Gatton Academy students in international research. By January 2011, the first 16 students studied abroad in Costa Rica, and the program was an immediate hit.

Because of the partnership’s success and increased demand for spots, a second annual voyage was added in 2017. Over the decadelong relationship, 224 Gatton students have conducted original, mentored research at Cloudbridge. The programs are led by The Gatton Academy, Dr. Keith Philips (WKU Biology), Dr. Martin Stone (WKU Agriculture and Food Sciences), and by Cloudbridge Nature Reserve scientists and climate change specialists.

Cloudbridge Nature Reserve is home to an international community of scientists conducting field research, working to understand the climate crisis. Cloudbridge is a lush, tropical oasis located in a mid-altitude cloudforest ecosystem. The private nature reserve is adjacent to Costa Rica’s Chirripo National Park, home to the nation’s tallest mountain and a designated UNESCO World Heritage Site. Cloudbridge is operated by a non-profit.

“It’s because we have made international STEM learning part of our student culture,” Strode said. “Our partnerships with Cloudbridge and others are known by every Gatton Academy student. Having an experience studying and researching at Cloudbridge is part of what makes the Gatton student experience so special.”

At Cloudbridge, students are arranged into teams of four for research projects. Each team is mentored in the field by a WKU professor or Cloudbridge scientist. As a biodiversity course, research topics have centered on species diversity and climate-change themes related to the forest. Example projects include surveying plant diversity of the Costa Rican cloudforest, studying elevational gradient effects on dung beetle diversity, and measuring carbon sequestration for varying forest regeneration stages using a mathematical model.

Cloudbridge is an ideal destination for student-based educational programming, and the reserve is currently accepting applications for new programs across a wide range of disciplines.

“Cloudbridge prides itself working with tomorrow’s leaders. Our relationship with The Gatton Academy has given us that opportunity,” said Tom Gode, president of the Cloud Forest Conservation Alliance, the non-profit that operates the reserve. “We are slowly weeding out our other tourist-type groups in order to provide a similar service to other school groups.”

About Cloudbridge Nature Reserve: Cloudbridge Nature Reserve is a private nature reserve stretching from 5085-8530 ft in the Talamanca Mountains of Costa Rica. Since 2002, 630 acres of cattle pasture or cultivated land with a further 70 acres of primary forest has been purchased by the reserve. Since its beginning, Cloudbridge has been dedicated to the conservation and reforestation of the cloudforest. Increasingly, education and research play a large part in the Reserve’s mission, teaching the importance of and expanding knowledge of the unique habitat for wildlife, sustainable tourism, and climate change.

About the National Consortium of Specialized STEM Schools: The National Consortium of Secondary STEM Schools (NCSSS) was established in 1988 to provide a forum for specialized secondary schools focused on science, technology, engineering, and mathematics (STEM) disciplines to exchange information and program ideas. Celebrating our 30th anniversary in 2018, the Consortium now includes more than 100 member schools (high schools), many 'ranked' as the best in the country, along with 55 affiliate members (colleges, universities, summer programs, foundations, and corporations) located in 32 states, that share the goals of transforming mathematics, science, and technology education.