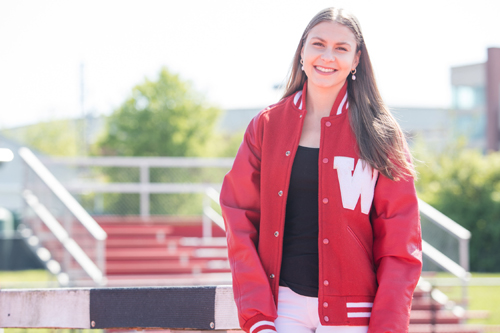 After speaking with Erik Jenkins, former coach of the WKU Track and Field program, Lemberg accepted a scholarship to attend WKU in late 2015. Her WKU journey started with a rapid transition from Estonia to the United States in the spring of 2016.

“I didn’t have time to be anxious about it or really think about it too much. It was just a quick decision. I do not regret it,” Lemberg said.

During her first few years at WKU, Lemberg pursued an undergraduate degree in Psychology with a concentration in Sports Psychology. She gained research experience working in the Motivation Lab with Dr. Steven Wininger, Co-Department Head and Professor in the Department of Psychology. A recipient of a Faculty-Undergraduate Student Engagement (FUSE) grant in the fall of 2017, her research centered on how multitasking affects people when they exercise.

“We put people on the stationary bike, have them text on their phone, and see how the intensity changes if they do something or if they just cycle,” Lemberg said.

This research experience gave her the chance to apply information learned in her Sports Psychology classes to a real-life question.

In addition to her studies, Lemberg was a pole vaulter for the WKU Track and Field team. She participated in multiple Conference USA (C-USA) Indoor and Outdoor Championships and earned distinctions for C-USA academic honors. Her time on the team positively shaped her WKU journey.

“My first three years, it was the team that had an impact on me. I probably would have had the same type of experience if I did not do track over here, but having all my teammates around me all day, every day for pretty much three years – I think this really made the team into my family,” Lemberg said.

After completing her undergraduate degree in Psychology, Lemberg chose to continue her graduate studies at WKU. However, her initial plan did not involve the Master of Social Work program.

“I wanted to do clinical psychology for my Masters degree, but my GRE score in English was one point short of what they wanted. One of my friends who did a social work undergraduate degree told me about the Master of Social Work program. You can do counseling with social work, and that’s how I ended up in social work,” Lemberg recalled.

Lemberg said that the change led her to a program that worked well with her academic and career goals.

“I’m glad that I ended up here because I feel this degree is more broad – I can do a lot more stuff and I like the program a lot,” Lemberg said.

Lemberg also praises the program for offering academic support and assisting her with career guidance.

“The professors are awesome. They are there for you whenever you need them. My advisor is Dr. April Murphy, an Assistant Professor of Social Work. At the end of last semester, I was struggling a little bit with what to do after I graduate. I went in her office and she helped me figure out what my options would be and what I could do,” Lemberg said.

In addition to her advisor, Lemberg has also forged connections outside of the program. One highlight of her graduate studies is her experience as a graduate assistant. She works directly with the Center for Applied Science in Health and Aging (CASHA) on WKU’s Bingocize® program as one of nine graduate assistants.

The Bingocize® program combines a bingo-like game with exercise and health education. The unique addition of bingo addresses many of the barriers to older adults’ participation because the game is fun, familiar, and done in a group setting. The program has been shown to increase older adults’ functional fitness, health knowledge and social engagement in a variety of settings.

“I’ve been there for two years now and I help with their clinical trial that is funded by the National Institute for Health (NIH) / National Institute on Aging (NIA). I help out during data collection, communicating with the sites about attendance sheets for participants and setting up testing dates,” Lemberg said.

Dr. Jason Crandall, Associate Professor of Exercise Science and Kinesiology and creator of WKU’s Bingocize® program, recalls Lemberg as a critical member of the team.

“She’s been involved every aspect of this project and has done a wonderful job. She helped with recruiting participants, putting together equipment, and traveling to all of the different sites in Kentucky and Tennessee to collect data,” Crandall said.

He noted that Lemberg even ran one of the intervention groups, working directly with Bingocize® participants. Her role was especially critical during the past few months, as circumstances rapidly changed and they could not continue to collect data.

“We were in the middle of a wave of data collection when [the coronavirus] hit – one of our best waves and we had to stop. There were still questions on whether we could continue, whether participants will cancel or show up and [Lemberg] was in the middle of that. She was instrumental in communicating with all of the facilities and participants,” Crandall said.

In addition to the changes during this spring semester, Lemberg has faced additional challenges in achieving her academic goals.

“My track and field eligibility was up at the end of the last school year, so my scholarship ended. I needed to find something else that would cover my tuition. I already had a graduate assistantship, so that covered a little bit, but I still needed something that would cover the rest of it,” Lemberg said.

This led Lemberg to apply for the International Student Diplomat program and make additional connections within the WKU community. Student diplomats are a helpful resource for prospective students wishing to attend WKU and answer questions on a variety of topics. Program participants also assist with the orientation of new students and communicate with current international students.

“She has an innate way of connecting with students, whether it be those asking questions hoping to come to WKU, or our currently enrolled students. She has a true passion for helping others and that carried through in every conversation she had with students. She was never afraid to try something new, and should it not turn out like she hoped, she would chalk it up to a learning experience and do it better next time,” Watkins said.

Connecting with other students in this role has also been personally enriching for Lemberg.

“It’s been great because during my track and field years, I didn’t have time to do anything else besides school and track, so now I have more of a proper introduction to the international community at WKU. This year has been awesome, getting to know all of the other international students,” Lemberg said.

As her final year at WKU ends, Lemberg is grateful for the entire experience that studying abroad has offered.

“I can really call people around here my family. Bowling Green and WKU is a home away from home,” Lemberg said.

Lemberg plans to continue her graduate studies by pursuing a Ph.D. program at the University of Tartu, located in her hometown of Tartu, Estonia.