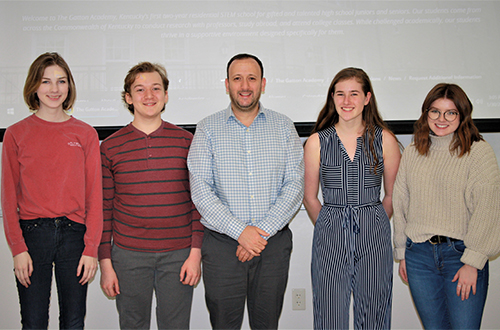 Four students from The Gatton Academy of Mathematics and Science in Kentucky will debate teams from around the nation this February as a part of an Arabic Debate Tournament.

The debate is hosted by QatarDebate, a member of Qatar Foundation, and is held for high school teams to compete on assigned topics in the Arabic language.  This year’s debate is being held at the University of Utah in Salt Lake City.

The team members have been learning the Arabic language over the past four semesters while attending The Gatton Academy.  Each student has taken a four-semester sequence of Arabic courses through the WKU Department of Modern Languages and has been preparing since the fall semester for the championship under the guidance of Lhousseine Guerwane, Instructor of Arabic with WKU’s Department of Modern Languages.  Each team member is also a part of The Gatton Academy’s STEM + Arabic program.  The STEM + Arabic program allows select Gatton Academy students who have an interest in both the STEM fields and the Arabic language to take increasingly-rigorous Arabic courses each semester in addition to the same, rigorous STEM curriculum that all Gatton Academy students take.

“This is an impeccable opportunity for our students to take their Arabic language studies to the next level.  Students participate in an Arabic Debate Club in addition to an Arabic debate course,” states Guerwane.  “Debating in the Arabic language helps these students become more confident in their language skills, as their Arabic improves drastically when they practice debating. They learn not only the language, but also public speaking, projection, articulation, and pronunciation. This year is the first edition of the US High Schools Championship and includes four schools, and QatarDebate is planning to expand it next year for more schools. The team who wins the US Championship will participate in the International Championship in Qatar in March, 2020.”

The team practices every Tuesday and Thursday.  Opening statements for all possible scenarios have been prepared in advance, and the team practices in Arabic together, designing potential approaches, arguments, and rebuttals.

“Debating is helping me become a lot more comfortable with my language skills. I also have a lot more topics I can have conversations about,” Traw said.  Traw, who studied abroad in Morocco during summer 2019 through a U.S. Department of State National Security Language Initiative for Youth Scholarship, is even eyeing international collaboration in her future.  “I plan on using my Arabic skills to study sustainability in other countries to try and implement their strategies in the US.”

During the tournament in Salt Lake City, the team will debate a variety of topics in Modern Standard Arabic. Teams have been given three possible topics to prepare for, including the ban of plastic bags, erasing all student debt, and the United States’ acceptance of more refugees.  At the tournament, teams will be assigned both topic and stance and given twenty minutes to prepare before the debate begins.